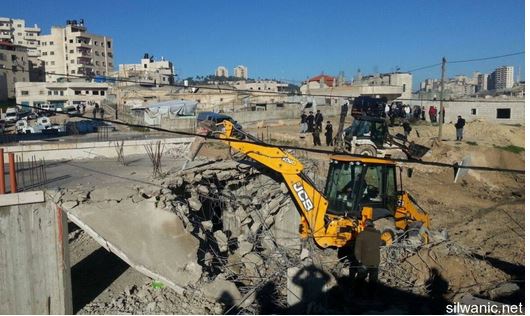 A number of Israeli military and police vehicles, accompanied by bulldozers, invaded the al-‘Isawiyya town, in occupied Jerusalem, and demolished a Palestinian home belonging to a local family.The Wadi Hilweh Information Center in Silwan (Silwanic) said the soldiers demolished the 180 square/meter home of Rehby Dari that was constructed nearly 10 months ago.

It added that the Jerusalem City Council is threatening to demolish around 100 more Palestinian homes in the town, allegedly for being built “without construction permits.”

Dari said he eventually had to construct his home without a permit due to exaggerated conditions and extremely high fees, imposed by the city council on the Palestinians, largely preventing them from building or expanding their properties, on their own lands, to accommodate their natural population growth.

“The occupation simply does not want us here; we are not welcome in our own city, Jerusalem,” he said, “They are fighting our steadfastness, that is why they ask for large amounts of cash for some paper work; approving an application for a construction permit takes years, and ends up being denied.”

Dari further stated that the soldiers stormed his home during dawn hours, and removed the family before demolishing the property, although he received the demolition order only 24 hours before his building was leveled.

Silwanic said clashes took place during the invasion, and that the soldiers fired concussion grenades, gas bombs, and rubber-coated metal bullets; one women, in her thirties, was injured and three schoolchildren were kidnapped.

In addition, soldiers kidnapped a young Palestinian man, identified as Mohammad Shawkat al-Khatib, as he was leaving the Al-Aqsa Mosque in Jerusalem, and took him to an interrogation facility.

Al-Khatib was kidnapped while dozens of Israeli extremists invaded the yards of the Mosque, while local worshipers tried to push them away.

On Monday at night and earlier Tuesday, soldiers kidnapped thirteen Palestinians in the West Bank, and Jerusalem. http://www.imemc.org/article/70303