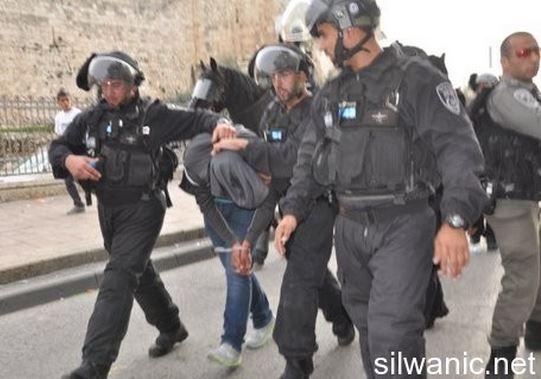 Israeli soldiers kidnapped, on Monday at night and Tuesday at dawn, at least thirteen Palestinians in the occupied West Bank and Jerusalem, including two children who were kidnapped along with four other Palestinian in Hebron.Local sources in Hebron, in the southern part of the West Bank, have reported that the soldiers invaded the city, stormed and searched several homes, and kidnapped three Palestinians identified as Ahmad Abu Shamsiyya, 24, Mohammad Yousef Rajabi, and Bara’ Mohammad al-Fakhoury, 16.

Another Palestinian, identified as Shehda Walid ‘Amro, 27, was kidnapped in Sinjer area, in Doura nearby town.

The Popular Committee against the Wall and Settlements in Beit Ummar town, north of Hebron, said the soldiers kidnapped Mahdi Ali Ekhlayyel, 21 years of age, after invading his home and ransacking it property.

The soldiers also invaded the home of detainee Ahmad Khader Abu Hashem, for the second time this week, and searched the property while military dogs ravaged through the furniture.

The invasion led to clashes in different parts of the town, while the soldiers fired rounds of live ammunition, rubber-coated metal bullets and gas bombs; many residents received treatment or the effects of tear gas inhalation.

In addition, soldiers invaded various neighborhoods in Hebron city, the Shiokh town, and installed roadblocks on the main entrances of Hebron city, Sa’ir and Halhoul towns, stopped and searched dozens of cars and interrogated the residents while inspecting their ID cards.

In occupied Jerusalem, soldiers invaded the al-‘Isawiyya town during morning hours, Tuesday, and kidnapped a young Palestinian, identified as Ahmad Zomorrod, after beating and kicking him causing various cuts and bruises to his head, face and several other parts of his body.

They also invaded al-“Isawiyya town and installed a roadblock blocking its western entrance.

In Bethlehem, soldiers invaded the ‘Aida refugee camp, north of the city, and handed a young man, identified as Ra’fat Mallash, an order for interrogation in the Etzion military base, south of Bethlehem.

They also invaded and ransacked the homes of Ibrahim Abu Jouda, and ‘Emad ‘Ayyad, and violently searched their homes.

On Monday at night, several military vehicles invaded the Nour Shams refugee camp, in the northern West Bank city of Tulkarem, and kidnapped one Palestinian identified as Hazem ‘Ali Abu Dayya, 23, after breaking into his home and searching it.

The soldiers also invaded Jaba’ village, in the northern West Bank district of Jenin, and kidnapped one Palestinian identified as Mohammad Yousef Salatma, 22 years of age.