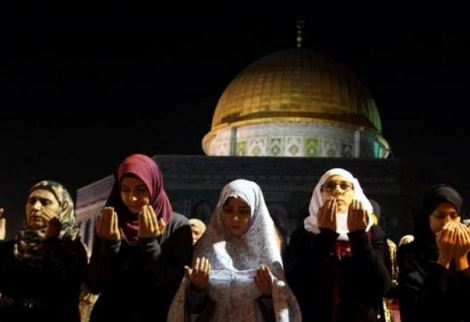 The Israeli Police in occupied Jerusalem released, on Monday evening, five Palestinian women after detaining and interrogating them for several hours, and ordered three of them away from the Al-Aqsa Mosque, and its yards, for 15 days.Hamza Qteina, of the “Lawyers For Jerusalem,’ said the Police kidnapped the five women while heading towards the Al-Aqsa Mosque, and took them to the al-Qashla Police Station for interrogation.

The Police alleges the women “violated public safety”, and the “public right to reach holy sites,” despite the fact that the police has been severely restricting, and largely denying, access of Palestinian Muslims into the mosque, while allowing Israeli far-right groups to march into its yards demanding its destruction, and “rebuilding the temple” in its place.

The Police ordered Hiba al-Husseini, Safa Seyaj and Ansam al-Moghrabi away from the Al-Aqsa Mosque, its yards and gates for 15 days, while Bara’a and Ansam were allowed to go to their school, Al-Aqsa Sharia School for Girls in the Al-Aqsa Mosque, from eight in the morning until two in the afternoon.