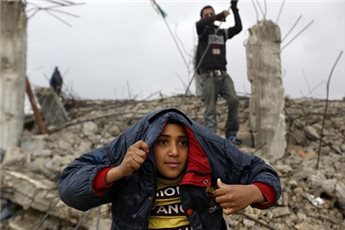 Palestinian teacher Abdelhakim Abu Jamus has just given the last of his shekels, to pay for his daughter’s schooling, and now has nothing left to feed his family of eight.According to AFP/Ma’an, like tens of thousands of Palestinian public sector workers, Abdelhakim has not been paid since December, after Israel suspended millions of dollars in tax revenues which should have been transferred to the Palestinian Authority, as punishment for joining the International Criminal Court (ICC).

‘I gave my daughter the last money I had and, now, I don’t know how we’re going to manage tomorrow,’ said Abu Jamus, who not only teaches but, in fact, runs a school in the occupied West Bank city of Ramallah.

On January 2, the Palestinians formally presented a request to join the Hague-based ICC in a first step towards suing Israel for war crimes.

Palestine is slated to join the ICC on April 1st, according to UN Secretary-General Ban Ki-moon.

Israel reacted by freezing $127 million in tax revenues that, by law, must be transferred to the Palestinian Authority (PA) — a move often employed as a punitive measure during diplomatic disputes.

Furthermore, under an economic agreement between the sides, signed in 1994, Israel transfers to the PA tens of millions of dollars, each month, in customs duties levied on goods destined for Palestinian markets which transit through Israeli ports.

Although the sanction has been imposed many times, it has rarely lasted more than one or two months, except in 2006 when Hamas won a landslide victory in Palestinian legislative elections.

Israel froze the funds for six months, on this occasion.

Blocking this money deprives the PA of more than two-thirds of its monthly budget, excluding foreign aid, and prevents it from paying the wages of some 180,000 employees of almost $200 million a month, total.

‘We know very well that Israel freezes the money for political reasons to put pressure on the Authority, but as civil servants we need to see the situation resolved quickly,’ Abu Jamus said.

Dalal Yassin, who works for Palestinian television, has also suffered a wage loss since Israel imposed the freeze.

But, she is in a better position than most, because her husband works in the private sector.

‘I see my colleagues struggling to pay their monthly bills and going through a really difficult time,’ she told AFP.

The Palestinian government has reportedly managed to raise enough funds to start paying 60 percent of the December salaries through loans, Arab aid and its own resources.

Ramallah shopowner Yasser Mussa is hoping the partial payment of salaries will mean that some of his customers will pay off their outstanding debts.

‘Every month, we extend credit to our clients, but, this time, the salaries have not been paid at the same time as a major storm hit the region and we have had to sell many products on credit,’ he said.

Ahead of a major winter storm, earlier this month, many Palestinians bought heaters to combat a cold snap which has only just begun to ease.

Arab foreign ministers have promised to provide Palestinians with a monthly ‘safety net’ of $100 million, but the commitment has rarely been activated.

The funds could offer vital assistance for the PA, economist Nasser Abdelkarim said.

‘Since the Second Intifada (the Palestinian uprising in 2000-2005), the economy has experience a major downturn,’ he said, with about 140,000 Palestinians who previously worked inside Israel losing their jobs.

In order to counter the soaring unemployment rate, the Palestinian public sector enlarged its ranks — and, with it, its monthly spending on salaries.

However, the Palestinian government is facing an even larger employee-related problem than the salary freeze.

In 2007, when Hamas seized power in Gaza, forcing out forces loyal to the Fateh movement of Palestinian president Mahmoud Abbas, roughly 70,000 government employees were left jobless. The 70,000 continue to be paid their salaries by the PA, however, despite not working.

Hamas then took on 50,000 new workers who have served the Gaza administration for the past seven years.

Since a national unity government took office in June, ending seven years of separate administrations in the West Bank and Gaza, Hamas employees have still not been paid.

News that the consensus government plans to rehire the 70,000 staff who were employed before 2007, in place of the Hamas workers, has sparked a series of angry protests and strikes.

The dispute threatens a fragile reconciliation deal between Fateh and Hamas which took effect last April, and led to the establishment of the unity government.