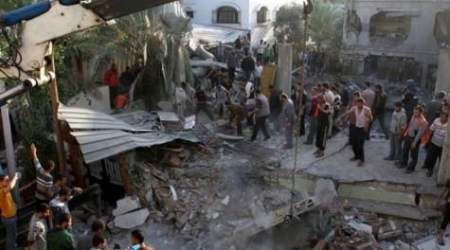 A new report has found that Israel’s indiscriminate military offensive during its latest war on the besieged Gaza Strip, this past summer, caused more civilian casualties than previous acts of aggression against the coastal enclave.The report, which was partly commissioned by Physicians for Human Rights and conducted by eight independent medical experts, showed that the Israeli regime did not differentiate between military targets and civilian populations during its latest assault on Gaza, according to Press TV/Al Ray.

“Attacks were characterized by heavy and unpredictable bombardments of civilian neighborhoods,” said the 237-page report, which was published on Tuesday.

In many cases, double or multiple consecutive attacks on a single location caused many civilian casualties as well as injuries and deaths among rescuers, the report added.

The Israeli military failed to give adequate warning for Palestinians to leave residential areas before assaulting them, the report said, adding that the Tel Aviv regime’s “early warning” procedures were not consistent and, often, did not give enough time for evacuation.

The report also pointed to suspected violations of humanitarian law and indiscriminate attacks which left medical workers dead, and urged a full investigation into the 50-day offensive.

The study was based on visits to the Palestinian territory during and after the Israeli aggression.

It also used interviews with 68 people who suffered injuries during the war, as well as autopsies on nearly 400 people killed and the review of medical files.

Israel officially began their most recent military assault on Gaza in early July of 2014, and later expanded its military campaign with a ground invasion into the besieged Palestinian territory. The war ended in late August that year. Nearly 2,200 Palestinians lost their lives and some 11,000 were injured. Over 100,000 were left homeless.