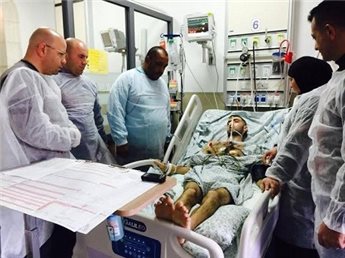 Jaafar Awad, a young Palestinian man who was released last Wednesday, from Israeli custody, due to serious health problems after a year of interrogation, was transferred Friday to Augusta Victoria Hospital, in occupied East Jerusalem, from a Hebron facility. His parents, who accompany him day and night, say his situation is worsening daily, and that he can now no longer speak or move.

Awad is attached to a breathing machine. His father told Ma’an correspondence that Jaafar started to suffer after an injection he was given at a clinic in Israel’s Eshel prison, six months ago.

Following the injection, his father added, Jaafar started to have vision troubles in his left eye as well as diabetes, thyroid swelling and severe pulmonary inflammation.

‘After his health conditions deteriorated seriously, a hearing was held at Ofer court and the court decided to release him after he was interrogated for 15 months,’ he said.

Lawyer Jawad Bolous pleaded on behalf of Jaafar, while the court decided that a fine of 40,000 shekels would be imposed, as well as a suspended sentence of 18 months, to be dismissed after 5 years. The fine was paid by the Palestinian Authority.

‘The judge told me that the court decided to release Jaafar because he was in a serious condition,’ the father said, explaining that Jaafar was detained from his family home in November 2013.

He was interrogated in the Ashkelon and Eshel detention centers for 21 days, and was accused of creating an armed cell, in addition to buying a vehicle with the intention to use it for running over Israeli soldiers in the ‘Gush Etzion’ area.

Jaafar was in good health before he was detained and had been studying at the Modern University College in Ramallah, added his father, noting also that his son had no prior health problems.

‘Six months ago, he had fever and was taken to a clinic in Eshel prison where he was given a shot after which his health condition started to deteriorate day after day. He once fainted and was taken to Assaf Harofeh Hospital and recently he was taken to Ramla prison hospital. He has already lost 31 kilos.’

‘Jaafar has been assassinated silently and slowly,’ he added, saying that Ramla prison hospital isn’t a hospital but rather ‘an execution chamber for our kids.’

Jaafar had been detained in 2009 and served 30 months in Israeli custody before attending college in Ramallah, his father says.