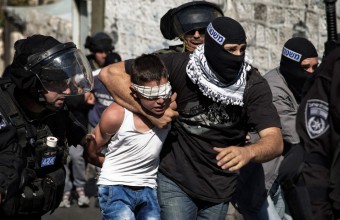 According to the UN Relief website, Mohammed Al-Ashqar died as a result of critical wounds sustained on October 22nd of 2007, at the southern Israeli detention camp of Al-Naqab (Ketziot), in the Negev, when Israeli guards fired upon prisoners with live ammunition and tear gas, injuring at least 250 other prisoners.

Father of one, Al-Ashqar was hit with several bullets which caused his death, and had been sentenced to approximately three years, with only three months remaining in his sentence.

The Center said that Israeli prisons recruit special elite units to suppress Palestinian prisoners. Masked and armed units terrorize prisoners through various measures, including surprise night raids on their cells, tying and beating them, confiscating their personal items, and shooting at them.

A report by the United Nations lists around 200 methods of torture. The Israeli rights group B’Tselem listed around 105 torture methods, according to the Middle East Monitor (MEMO).

‘Regardless of the number, all these reports indicate a grave level of violations perpetrated against Palestinians following their arrest,’ the publication stressed.

Fahd Abu Al-Hajj, director of the Abu Jihad Centre for Prisoner Affairs at the University of Jerusalem, noted that there are 73 methods of interrogation considered to be the ‘most popular’ in Israeli jails. According to Al-Hajj, these methods demonstrate the barbarism of the occupation and its lack of respect for basic standards of human rights, MEMO added.

It additionally reported that, ‘B’Tselem acknowledged in a report that 105 torture methods are used against Palestinian detainees which are considered serious violations of human rights. A UN human rights committee described the torture in Israeli prisons as “crossing the line”, noting that Israel’s brutal methods of torture included breaking backs, pulling fingers apart and twisting testicles.

‘According to statistics, around 72 prisoners were killed as a result of torture in Israeli prisons since 1967, out of a total number of over 200 prisoners who died behind bars.

‘The first prisoner to die as a result of being tortured was Yousef Al-Jabali who died on January 4 1968 in a Nablus prison. Many prisoners have since followed him, such as Qassem Abu Akar, Ibrahim Al-Rai, Abdul Samad Harizat, Attia Za’anin, Mustafa Akkawi, and others, including the most recent, Raed Al-Jabari,’ it reported.

In related news, Palestinian prisoner representative in Hasharon prison, Amin Zaida, has revealed increasing cases of abuse among juvenile prisoners while being transferred to other prisons.

These statements came during the attorney Fawaz Shludi’s visit to juvenile prisoners detained at Hasharon prison, according to the Palestinian News Network (PNN).

Shaludi said that 17-year-old Malik Hamdan, of Jerusalem, was the latest prisoner who witnessed such aggression from the ‘Nahchon’ forces during his transfer to prison.

Hamdan was severely beaten on his face and the rest of his body. As a result, he was transferred to Ramleh prison clinic, stressing that the prisoners had filed a complaint about it.

It should be noted that about 38 prisoners below the age of 18 are imprisoned in Hasharon occupation cells, in addition to 71 minors in Megiddo, and 84 in Ofer prison.

According to Census Department of the Palestinian Commission of Detainees report, Israeli forces kidnapped 3755 children in the last four years, including 1266 in 2014.

Israeli forces are also violating the international law by kidnapping children. On Friday, Israeli occupation court sentenced a 14-year-old girl to 2 months imprisonment and a $1523 fine, for allegedly throwing stones.

WAFA futher reports that “around 500 – 700 Palestinian children, some as young as 12, are arrested, detained and prosecuted in the Israeli military detention system each year. The majority of Palestinian child detainees are charged with throwing stones. No Israeli children come into contact with the military court system,” according to Defense for Children International (DCI).

“Despite international condemnation and awareness of Israel’s widespread and systematic ill-treatment of Palestinian child prisoners, there have been no practical steps taken to curb violations,” said Ayed Abu Eqtaish, Accountability Program director at DCI-Palestine. “The international community must demand justice and accountability.”

Israel is the only state to automatically and systematically prosecute children in military courts that lack basic standards of due process.

Addameer human rights group says that most of the detained children report being subjected to ill-treatment and having confessions extracted from them during interrogations. Forms of ill-treatment used by Israeli soldiers reportedly include slapping, beating, kicking, violent pushing, threats and even sexual assault.