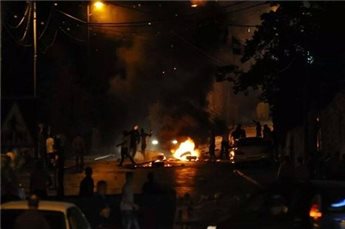 Israeli undercover police, late Monday, detained a 10-year-old Palestinian boy near his home in the Shu’fat neighborhood of occupied East Jerusalem, leading to clashes between locals and Israeli forces, according to the boy’s family.Muhammad Said Oweida was returning home from a nearby shop when Israeli forces assaulted him and arrested him, his uncle told Ma’an News Agency.

Oweida said that Israeli undercover officers dressed in civilian clothes arrested Muhammad, and that some locals initially thought they were Israeli settlers.

Clashes broke out in the area, with Israeli forces firing stun grenades at the crowd.

An Israeli police statement said Muhammad was detained for throwing stones at the light rail train in the neighborhood.

In July of 2014, a group of right-wing Israeli settlers kidnapped, tortured and 16-year-old Shufat local Muhammad Abu Khdeir to death, leading to days of protests and clashes with Israeli forces in the neighborhood.

Israeli forces regularly arrest minors in the occupied West Bank, including East Jerusalem, usually on the pretext of stone-throwing.