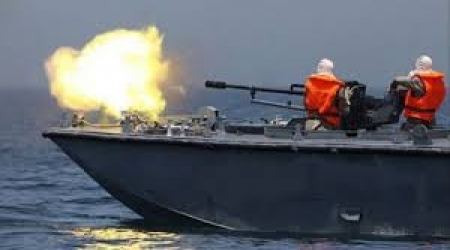 Israeli navy soldiers, Monday, targeted Palestinian fishing boats with a hail of gunfire offshore al-Sudanyeh, northwest of Gaza, according to WAFA correspondence.An Israeli navy gunboat chased after Palestinian-owned fishing boats, opening fire at them despite being within the six-nautical-mile zone allowed for fishing, causing financial damages to the boats; no injuries were reported.

The fishermen were forced to leave the sea for fear of being killed, injured or arrested.

The Israeli navy now targets Palestinian fishing boats almost on daily basis, in clear breach of the Egyptian-brokered truce agreement reached on August 26 of last year. This agreement includes allowing Palestinian fishermen to sail within 6 nautical miles in the Gaza Sea, with an incremental expansion in the allotted area.

According to the Palestinian Center for Human Rights (PCHR), subsequent attacks have taken place within the distance of six nautical miles, proving that Israeli policies in fact aim to tighten restrictions on the Gaza Strip’s fishermen and their livelihoods.

The latest Israeli aggression on the Strip has further aggravated the region’s already devastated economy as a result of the eight-year-long blockade imposed on it.

Israeli attacks against Palestinian fishermen ‘constitute a flagrant violation of international humanitarian and human rights law, relevant to the protection of the civilian population and respect for its rights, including every person’s right to work, and the right to life, liberty and security of person, as codified in Article 3 of the Universal Declaration of Human Rights and Article 6 of the International Covenant on Civil and Political Rights (ICCPR).