Seven Kidnapped In The West Bank, One Injured 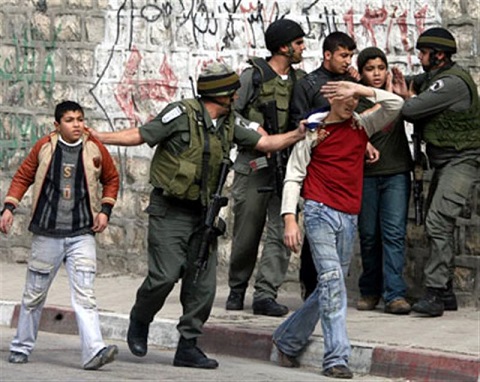 The two were taken prisoner after the soldiers stopped them on a military roadblock the army installed on the northern entrance of the town.

In Bethlehem, soldiers kidnapped Sufian Khaled Sabarna, 20, from the al-Fawaghra neighborhood in the center of the city, and Mo’in Mohammad Masalma, 18, from the Saff Street.

Both were taken prisoners from their families’ homes after the soldiers invaded them.

His abduction comes only two days after the soldiers kidnapped his brother.

In addition, soldiers invaded the Hebron city center, and kidnapped a teenager identified as Ya’coub an-Natsha, 17 years of age, from the Old City.

The soldiers also invaded various neighborhoods in the city, and the nearby towns of as-Sammoa’ and Doura, and installed roadblocks on the main entrances of Sa’ir and Halhoul towns, before stopping and searching dozens of cars, and questioned scores of Palestinians while inspecting their ID cards.

On Tuesday at dawn, a Palestinian teen, identified as Bassem Zakariyya Suleiman, 17 years of age, was shot and wounded by Israeli army fire after a number of Israeli settlers invaded the Nablus, and broke into the Joseph Tomb area.

Clashes took place following the invasion, and the army fires rounds of live ammunition, wounding Suleiman in the leg.

Suleiman is from ‘Askar al-Jadid refugee camp, in Nablus, he was moved to a local hospital for treatment.