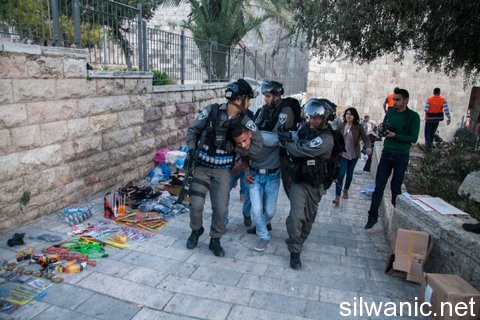 Lawyer of the Ad-Dameer Prisoner Support and Human Rights Association Mohammad Mahmoud stated that Israeli soldiers kidnapped, on Tuesday, three Palestinians in Silwan town and in the Old City of occupied Jerusalem.Mahmoud said the soldiers kidnapped Ahmad Abed al-‘Awar, 17 years of age, and Bilal al-‘Awar, 21, and took them to an interrogation center in the city.

On Monday evening, undercover soldiers kidnapped a child, identified as Mohammad Sa’id Oweida, 10 years of age, while standing in front of his home in Shu’fat, in occupied Jerusalem.

The child was taken to a police center in Beit Hanina after the soldiers alleged he hurled atones at the light rail; he was released later on.

Seven Kidnapped In The West Bank, One Injured