Report: “37 Children Exiled From Their Homes In Jerusalem, 253 Under House Arrest” 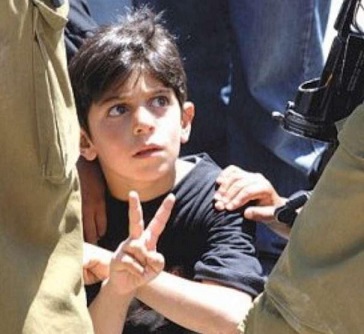 The Palestinian Committee of Detainees and Ex-Detainees has reported that Israel’s ongoing kidnappings of Palestinian children in occupied Jerusalem have led to more than 1500 abductions, since the beginning of 2014, while 37 children are currently not allowed back home, and 253 children are forced to live under house arrest.
The Head of the Census Department of the Palestinian Prisoners Committee, Abdul-Nasser Ferwana, told the IMEMC that the abductions of the children all took place since the beginning of 2014, but the number of abductions escalated starting in July.

He said the latest abduction campaign carried out against Palestinian children is the biggest in many years.

The Committee reported that kidnapped children are sent to Israeli military courts, and are prosecuted as adults, while the courts continuously impose high fines on their families. In addition, the Israeli courts often force the children away from their homes for a certain period, accompanied by a parent or an older family member, while many are forced to remain under house arrest for extended periods.

The Committee confirmed that 37 children are currently under orders denying them access to their own neighborhoods and homes, and 253 more are currently living as prisoners in their own homes, under house arrest.

The courts force the families to sign affidavits to abide by the rulings, and if the child violates those agreements, the parents are themselves imprisoned or fined, and the child sent back to prison.

The Committee said this type of punishment turns the parents into jailers of their own children, thus turning the verdicts into compounded punishment against entire families.

Children who are forced to live under house arrest, or those exiled from their homes and neighborhoods, have to wear ankle monitors directly supervised by the Israeli Police, and the security forces.

The Prisoners’ Committee denounced the Israeli procedures and rulings against the children, and said such measures are direct violations of International Law and all related international conventions on the protection of children, especially the “Convention on the Rights of the Child.”

On Monday January 26th, the Palestinian TV published a report about a child, identified as Ahmad Salhab, 15 years of age, who was forced to endure house arrest for eight months, followed by two months of exile from his family home in Jerusalem.

Salhab is allowed to go to school as long as a parent accompanies him there, and back home, in the morning and after school ends for the day.

He spent the two months of exile from his home at his aunt’s place in Jabal al-Mokabber in occupied Jerusalem.

“I cannot go to school on my own; I can’t be in the street without a parent; usually, my mother takes me to school, and my father brings me home,” Salhab told the Palestinian TV, “I am not allowed to leave home for any other reason, I can’t even go on a trip with my parents…’

Amjad Abu ‘Asab, head of the Detainees Parents Committee in Jerusalem, said the Israeli rulings and restrictions are impacting the children’s relations with their parents, who have to act like jailers at home, in order to avoid having their children imprisoned by Israel.

“These violations are causing various psychological issues to the children; many suffer from bladder incontinence due to psychological trauma,” he said, “The children become more isolated, more distanced from their families and friends. What Israel is doing is a well calculated policy to destroy the social fabric of our society.”