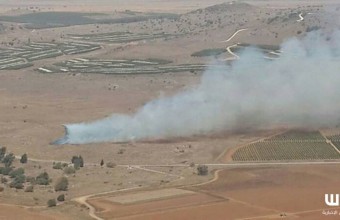 Two rockets fired from Syria hit the Israeli-occupied Golan Heights on Tuesday, just nine days after an Israeli air strike in Syria killed several Lebanese Hezbollah guerrillas and an Iranian general, Reuters reported.According to the PNN, an Israeli military spokesman said that, after the rockets struck, the army ordered the evacuation of Israel’s Mt. Hermon ski resort in the Golan Heights.

It was not immediately known who launched the projectiles. Israel’s Channel 2 TV said there were no casualties and that Israeli forces returned fire.

At least 20 artillery shells were reportedly fired into Syria, by Israel, in response.

In an Israeli air strike on a Hezbollah convoy near the Golan Heights, on January 18th, an Iranian Revolutionary Guard general, Mohammed Allahdadi, was killed along with a Hezbollah commander and the son of the group’s late military leader, Imad Mughaniya.

Israel captured Golan from Syria in the 1967 Middle East war. Numerous mortar shells and rockets have been reported to hit the region during Syria’s nearly four-year-old civil war.

Israeli officials have said that some of these incidents deliberately targeted its soldiers, while others were overspill from fighting between rebels and forces loyal to Syrian President Bashar al-Assad.