Over 80 Cartoonists And Comics Workers: ‘No Business As Usual With Israel’ 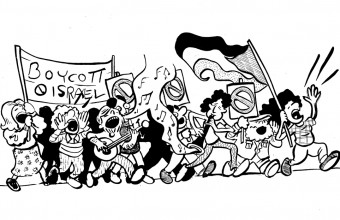 More than 80 cartoonists and other workers in the comics industry, including colorists, writers, critics, and editors, from over 20 countries, signed an open letter released today addressed to Franck Bondoux, the head of the International Festival of Comics at Angoulême, which opens in France on January 29th.The letter, a follow up to a 2014 letter, demands that he sever ties between the Festival and Sodastream, an Israeli manufacturing company complicit in the occupation of Palestinian land. The authors of the letter include 10 prize winners at Angoulême itself, two winners of the MacArthur ‘Genius Grant,’ many Eisner and Ignatz awardees, and a Palestinian cartoonist previously imprisoned for his work by the Israeli military.

The organizers of the letter also released an accompanying statement, in the wake of the slaying of cartoonists Wolinski, Cabu, Honoré, Tignous and Charb, among many others in Paris this month. ‘These horrific acts of violence compel artists of the world to act urgently for a world where the dignity, freedom, and equality of all people are respected and promoted,’ said cartoonist Ethan Heitner and writer Dror Warschawski, organizers of the open letter. ‘We affirm that the Palestinian boycott movement is one important step towards that vision, and we urge others to join us.’

The 2015 letter expands on its predecessor in several key ways. Its signatories include workers in the comics industry beyond cartoonists, including critics Jeet Heer and former heads of the Cité internationale de la bande dessinée Thierry Groensteen and Gilles Ciment, and organizers of the first-ever festival of comics held in Palestine, Palestine Comics, which opened in November of 2014.

The letter also addresses itself beyond Angoulême, to ‘all festivals, conventions, and celebrations of comics and cartooning art in which we participate.’ Finally, the letter expands its target beyond Sodastream, to all ‘Israeli companies and institutions’ complicit in ethnic cleansing, discrimination, and war crimes. Noting that Israel’s assault on Gaza in the summer 2014 alone killed over 2,100 Palestinians, the signatories urge, ‘No business as usual with Israel.’

View the full letter and signatories at the Palestinian News Network.