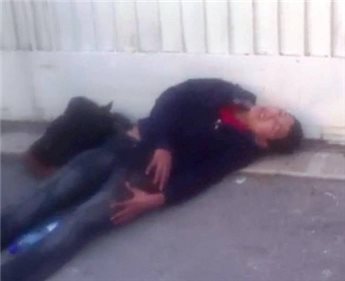 An Israeli settler, Wednesday morning, assaulted a Palestinian teenager from the al-Thuri neighborhood, near Silwan, occupied East Jerusalem, while the boy was walking to school.Jamil Gheith told Ma’an News Agency that the settler attempted to kidnap his 14-year-old son Ibrahim, but managed to flee the scene.

Mr. Gheith explained that a group of settlers from one of the illegal outposts in al-Thuri stopped their car while one stepped out and brutally attacked Ibrahim. The settler then tried to drag the boy forcibly into the car, but the boy started to scream for help and managed to run away.

Family members and other residents in the nearby houses heard the boy screaming and rushed to help him. At that point the attacker ran to the outpost and his escorts sped away, Geith said.

Locals called Israeli police who arrived and, instead of looking for the attacker, they began assaulting Palestinian residents who were at the site, including family members of the boy.

The victim was then taken to West Jerusalem’s Shaare Zedek medical center, for treatment, while his father filed a complaint at an Israeli police station.

An Israeli police spokesman claimed he was looking into the report.