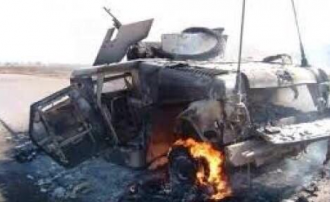 Israeli sources have reported, Wednesday, that two soldiers have been killed and seven injured in an attack carried out by fighters of the Lebanon-based Hezbollah party in the Shebaa farms, in southern Lebanon. A Spanish member of the UNIFIL was killed in the Israeli strike.
The sources said that one of the slain soldier is a senior commander who was touring with the soldiers in the occupied territory.

The Hezbollah-run al-Manar TV said its fighters targeted an Israeli military convoy, composed of several armored vehicles and senior military officers, in the occupied farms, by firing rockets at them causing various deaths and injuries.

It said that on Wednesday, approximately at 11:25 before noon, fighters of its al-Quneitra Martyr’s group firing specialized rockets targeted the Israeli convoy in the Shebaa farms.

In its statement, Hezbollah said its fighters ambushed nine Israeli military vehicles operating in the Shebaa farms.
The latest Hezbollah operation is likely motivated by the recent Israeli air strike, on January 18 that targeted Hezbollah fighters killing six of them in addition to an Iranian general.

Commenting on the shelling, the Lebanese army said it has nothing to do with the attack, as it was not carried out from a Lebanese territory, adding that the Israeli retaliation was random, targeting different area along the border.

The Israeli army said “it was not interested in retaliation,” yet the army bombarded Kfarchouba village, in southern Lebanon, with more than 25 shells, while the Israeli Air Force also bombarded several Hezbollah targets.

Israeli Army spokesperson Moti Almoz said the Israeli bombarded is not the last Israeli retaliation to the attack.
Israeli army Chief of Staff Benjamin ‘Benny’ Gantz arrived in the Northern Command of the Israeli Army to hold a session to evaluate the situation with senior military commanders.

Two Israeli Soldiers have been killed, following an exchange of fire between the Shuhada Al-Qneitra Hezbollah group, in Syria, and Israeli forces in Shebaa village, on the southern Lebanon borders (occupied Golan Heights), Israeli Channel 10 announced.

Netanyahu responded by recalling the aggression on Gaza last summer: ‘Who wants to challenge us in the north [of Israeli-occupied Palestine] must look at what we’ve done to Gaza.’

Israeli forces are importing tanks from the South to the North, in addition to warships currently entering Lebanese territorial water.

The UN units on the Israeli-Lebanese borders have been deployed to ‘calm the situation’, and implement the ceasfire taken in 2006.

On the other hand, authorities asked Israelis in Galilee not to leave their houses, but to evacuate public places.

The Israeli air force announced strikes on Syrian army artillery targets, late Tuesday night, in response to an earlier rocket attack on Golan Heights and Mount Hermon which, in turn, came as a response to killing 6 Hezbollah members in Syria, on January 18th.