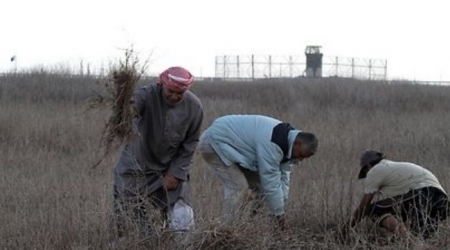 Israeli troops stationed across the borders with the Gaza Strip opened fire, Wednesday morning, at Palestinian fields east of Khan Younis.Witnesses said, according to Ma’an, that the Israeli soldiers fired machine guns at agricultural lands in the outskirts of al-Fukhkhari village. No injuries or casualties were reported.

According to WAFA correspondence, soldiers opened indiscriminate fire, forcing farmers who were tending to their crops to flee, in a flagrant and continuous violation of the ceasefire deal that ended the latest deadly Israeli onslaught on the war-torn coastal enclave.

Israeli Forces routinely open fire on Palestinian farmers and other civilians if they approach large tracts of borderline land that Israeli forces have deemed off-limits to Palestinians, as well as on fishing boats sailing within the six-nautical-miles zone.

The ceasefire deal of August 26, 2014, stipulated that Israel would immediately ease the blockade imposed on the strip and expand the fishing zone off Gaza’s coast, but it has failed to do so.