Soldiers Kidnap Three Palestinians In Jerusalem, One In Bethlehem 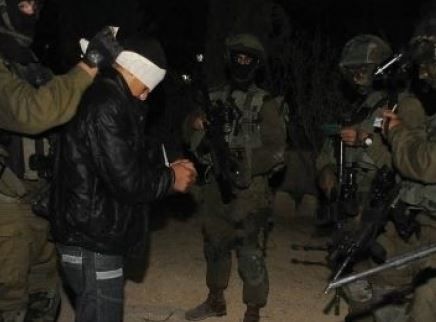 Israeli soldiers, accompanied by a number of security officers, invaded on Wednesday evening several Palestinian homes and stores in different parts of occupied East Jerusalem, and kidnapped three Palestinians. One Palestinian kidnapped in Bethlehem.Local sources said the soldiers invaded the home of political prisoner Nasser al-Hidmi, in the Suwwana neighborhood, in Jerusalem, and the homes of two former political prisoners identified as Hani Abu Odah in Wad al-Jouz and Tha’er Abu Lafy in the Suwwana neighborhood, for the second time this month.

The Odah family said the soldiers ransacked their home while searching it, confiscated documents and a mobile phone belonging to their son, and handed him a military order for interrogation in the al-Maskobiyya police station.

On his part, former political prisoner Abu Lafy said the soldiers searched and ransacked his home, allegedly looking for weapons and explosives, and left later on.

In addition, soldiers invaded Teshreen Studio, belonging to the Shalabi family in Salah ed-Deen area in Jerusalem, violently searched it causing excessive property damage, and kidnapped Osama Shalaby and his brother Hussein after assaulting them.

Furthermore, soldiers invaded a store in Sultan Suleiman Street, searched it and kidnapped a young man.

The soldiers stopped and searched dozens of cars, and interrogated scores of residents while inspecting their ID cards.

Another roadblock was also installed on the main entrance of Teqoua’ town, east of Bethlehem, before the soldiers stopped and searched dozens of cars, and questioned many residents while inspecting their ID cards.

The soldiers also kidnapped a young man, identified as Ward Mohammad Fararja, 18 years of age, from the Deheishe refugee camp, after he headed to the Etzion military and security base, south of Bethlehem.

Fararja went to Etzion after receiving a military order for interrogation earlier in the day.