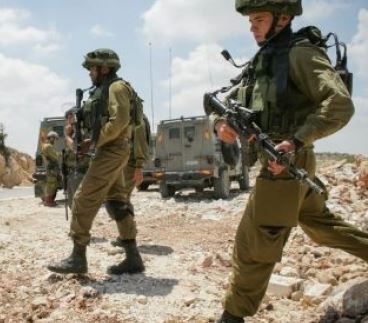 Israeli soldiers detained, Wednesday, four children, including a Jordanian child, and two with special needs, in Zabbouba village, near the northern West Bank city of Jenin. Two Palestinians kidnapped near Bethlehem.The Palestinian District Coordination Office (DCO) in Jenin said it contacted its Israeli counterpart, and managed to secure the release of the four detained children.

It said the children have been identified as Laith ‘Awni Jaradat, 15, his brother Wisam, 16, who both suffer from hearing and vision impairments, in addition to Abdullah Sa’id Jaradat, 14, and Mohammad ‘Azzam Jaradat, 15.

Mohammad is from ‘Aqaba city in Jordan, and is currently visiting relatives, with his family, in Zabbouba.

The Israeli army claimed it arrested the four children after a number of Palestinian youths hurled stones and empty bottles on military vehicles.

The DCO said it instantly contacted the Israeli side and managed to secure the release of the four detained children.

DCO head, Lieutenant Mojahed Abu Dayya, said the Palestinian security forces and district security offices, “are always acting on protecting their people,” and called on the Palestinians to instantly inform the office whenever the soldiers kidnap Palestinians, especially children.

Although the Palestinian DCO can rarely secure the release of kidnapped residents, it was relatively successful in convincing the Israeli DCO to release detained children before they were sent to prisons, detention centers and interrogation facilities.

The army usually instantly transfers kidnapped Palestinians to its interrogation centers, and once they are there; it becomes largely impossible to secure their release or even know where they are being held and interrogated.

In related news, soldiers kidnapped on Wednesday afternoon a young Palestinian woman, and a young man, near the Gush Etzion junction, south of the West Bank city of Bethlehem.

The army claimed that two carried concealed knives, and that the young woman threw stones at settlers’ cars. The two were moved to the Etzion military and security base for interrogation.

It is worth mentioning that, last year, Israeli soldiers kidnapped and detained around 1266 children, 21% of the total number of Palestinians, kidnapped by the army in 2014.