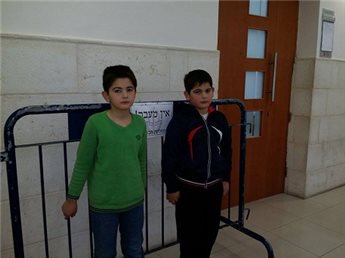 Seven-year-old East Jerusalem schoolboy Mousa Zallum, who survived a kidnapping attempt in July of 2014, along with his 8-year-old brother Yahya, on Wednesday, identified the extremists who attempted to kidnap Mousa. The two recognized by the Zallum boys also stand accused of kidnapping, torturing and ultimately murdering 16-year-old Muhammad Abu Khdeir from the same neighborhood only a day after they failed to kidnap Zallum.

‘I heard the sound of a car braking as it entered Shufat. Then I heard the voice of Mousa shouting for help and calling out to me,’ Dina told the Israeli human rights group Btselem on July 7. With the help of his mother and his screams, which alerted passersby, Zallum escaped and the attackers fled the scene.

The defense attorney asked the boys several questions, focusing on small details, in an attempt to find discrepancies in their testimonies, family members who attended the hearing told Ma’an News Agency.

They said that, in most of the details, the boys gave similar information.

Both confirmed that the suspect assaulted Mousa and grabbed him by the throat before attempting to throw him into the car. Their mother intervened by attacking the settler in the head and, then, pulled Mousa back, the boys told the court.

Lawyer of the Abu Khdeir family Muhannad Jubara said that the defendants’ lawyers tried ‘in vain’ to mislead the boys by showing discrepancies between their testimony and what they told police investigators in July.

‘Even if there is some discrepancy between what witnesses say in the initial investigation and what they say in the final investigation, that doesn’t annul their testimony because of the time span between both,’ the lawyer added. The court, he said, has scheduled four more hearings for April and May.

‘For the first time, I exit the court hall relaxed and that is because the Zallum boys recognized two members of the gang who murdered my son Muhammad despite the attempts to practice pressure on them.’