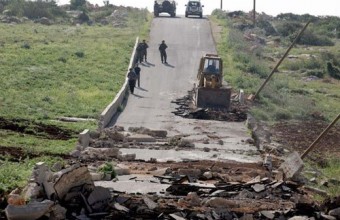 Israeli bulldozers, on Thursday, destroyed a water pipe being used in connecting the West Tubas district’s Atoof village with Khirbet Yezra, in the northern Jordan Valley.Head of Al-Maleh local council, Aaref Daraghmeh, said that the pipe had length of 1,000 meters, and was donated by Agricultural Relief to provide the residents of Yezra with water, since the area has no water sources.

According to the PNN, Dr. Hanna Issa, professor and expert on international law, strongly condemned the action, saying that occupation authorities provide settlers with water, while depriving Palestinians of their own sources.

Settlers in the occupied West Bank reportedly get an unlimited supply of water amounting to about four times more than Palestinians’ consumption of water.

Issa added that occupation authorities consume about 80% of the mutual water wells, despite the fact that 80-95% of them are located in Palestinian areas, pointing out that this is water theft, and in contravention of international law.

Issa also stressed that Israel has continuously implemented a policy of displacing Palestinians, separating them from homes near water sources.

Issa reiterated that Israel was an occupying power and had no sovereignty to tamper with water sources, according to the fourth Geneva convention.