Settlers Attempt To Kidnap A Palestinian Toddler In Jerusalem 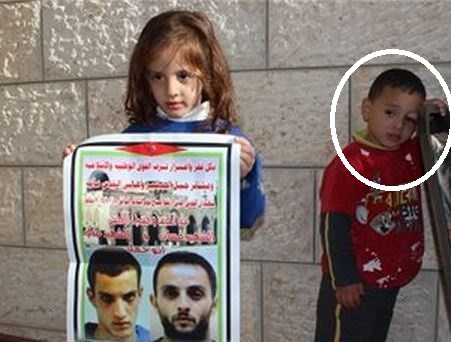 Israeli settlers attempted, Thursday, to kidnap a Palestinian toddler in one of the streets of Jabal al-Mokabber town, in occupied East Jerusalem.
Media sources said the settlers tried to kidnap Mohammad Ghassan Abu al-Jamal, 18 months of age, while walking with his brothers after leaving a local medical center in Jabal al-Mokabber.

The child’s uncle, Muawiya Abu al-Jamal, said Mohammad was walking approximately 8 meters ahead of his family members when a settler woman, who had her car parked nearby, stepped out of the vehicle and grabbed the child before running away.

The car was parked near Armon HaNetziv illegal settlement outpost; the settler woman stepped out of the car while another settler remained behind the wheel.

She grabbed the child and ran for approximately 20 meters, while his brothers chased her in an attempt to stop her, the Maan News Agency said.

The settler then started shouting, “Arabs, Arabs… they want to kill me,” before dropping the child and jumping into the vehicle that was waiting for her, and drove towards Armon HaNetziv.

The child is the son of Ghassan Abu al-Jamal, who was killed after he and his cousin Odai, attacked a Jewish Yeshiva in West Jerusalem, on November 18, 2014, killing four Israelis before they were both shot and killed by the Israeli Police.