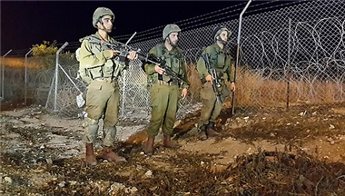 Mohammad Awad, coordinator of the Popular Committee Against the Wall and Settlements in Beit Ummar, said the several military vehicles invaded the ath-Thaher area, and conducted provocative acts that led to clashes with dozens of local youths.

Awad added that the invasion targeted an area close to the Somoud local mosque.

The invaded area is next to the Karmie Tzur illegal settlement, built on privately owned Palestinian lands.

The attack is part of numerous similar violations and assaults carried out by fanatic settlers, in addition to frequent Israeli military invasions.

Also on Thursday evening, the Israeli army said it kidnapped two Palestinians who reportedly “crossed the security fence with Gaza,’ and ‘attempted to infiltrate into the Eshkol Regional Council of Settlements.”

The army alleged the two “carried grenades,” and were planning an attack, before the soldiers arrested them, and took them to an interrogation facility.