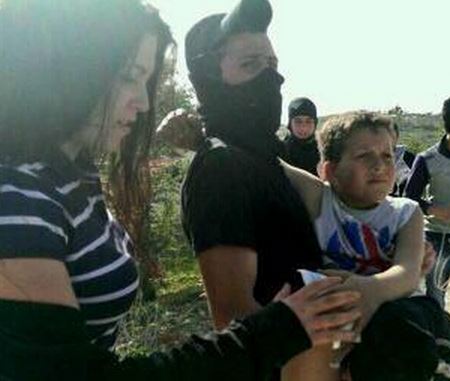 Palestinian medical sources have reported that a child was shot and injured by Israeli army fire, and scores of Palestinians suffered the effects of tear gas inhalation, in the weekly protest against the Wall and Settlements in Nabi Saleh village, near the central West Bank city of Ramallah.This week’s protest, named “Give Us Our Childhood,’ demanded an end to Israel’s escalation against Palestinian children that led to many deaths, injuries and arrests.

The violations include increased settler attacks targeting children in Palestine, including in Jerusalem.

Media sources said a child, identified as Mohammad Bilal Tamimi, 15 years of age, was shot in the thigh, and was moved to the Palestine Medical Center in Ramallah, suffering a moderate injury.

The weekly protest started at the Martyrs Square before the residents, and a number of international and Israeli peace activists marched towards the Iron Gate that blocks the main entrance of Nabi Saleh.

The nonviolent protesters carried Palestinian flags, while many children carried pictures of Malak al-Khatib, 14 years of age, who was recently sentenced by an Israeli military court to two months imprisonment, and 6000 New Israeli Shekels fine, after the soldiers alleged she “attacked them.”

The attack led to clashes between local youths and the soldiers who fired more gas bombs and rubber-coated metal bullets.

The Popular Resistance Committee in Nabi Saleh demanded the international community to act on holding Israel accountable for its crimes against the Palestinian people, especially the children, and the ongoing violations against Palestinian lands, property and holy sites.

It said the Palestinians will never abandon their legitimate rights, and will continue their resistance against the occupation until liberation and independence.