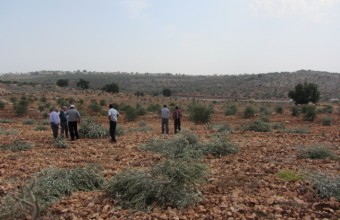 Extremist settlers from the illegal Ma’on settlement, to the south Hebron, Saturday, cut down a number of olive and almond trees in Al Hamra, near Yatta town.Coordinator of the South Hebron Hills Popular Resistance Committee against the Wall and Settlements, Rateb Jabour, stated to PNN that the trees belong to members of the Rab’i family, Tayseer and Yasir Musa.

Violent attacks on Palestinian property such as this are not a new occurrence for West Bank settlers. Cutting down trees is an act of extremism which is performed weekly on Palestinian lands, with no end in sight.

Palestinian calls for intervention are rarely answered by the international community and human rights organizations. However, they are well documented, as WAFA reports:

“Since 1967, Israel has established about 150 settlements (residential and others) in the West Bank, including East Jerusalem; in addition to some 100 “outposts” erected by settlers without official authorization. Three new settlements were approved in 2012 by retroactively ‘authorizing’ such outposts,” according to a United Nations Office for the Coordination of Humanitarian Affairs (OCHA) report.

Settlements are illegal under international law, as they violate Article 49 of the Fourth Geneva Convention, which prohibits the transfer of the occupying power’s civilian population into occupied territory.

“The failure to respect international law, along with the lack of adequate law enforcement vis-à- vis settler violence and takeover of land has led to a state of impunity, which encourages further violence and undermines the physical security and livelihoods of Palestinians,” said OCHA.

OCHA Protection of civilian weekly report, covering the period between 30 December 2014 – 12 January 2015, said that, ”Israeli settlers reportedly uprooted or vandalized a total of 5,554 trees and saplings in four separate incidents.”

It said that “on 8 January 2014, around 580 olive and almond trees were cut down by settlers near the villages of Qwawis and Ma’in (Hebron) affecting ten families.”