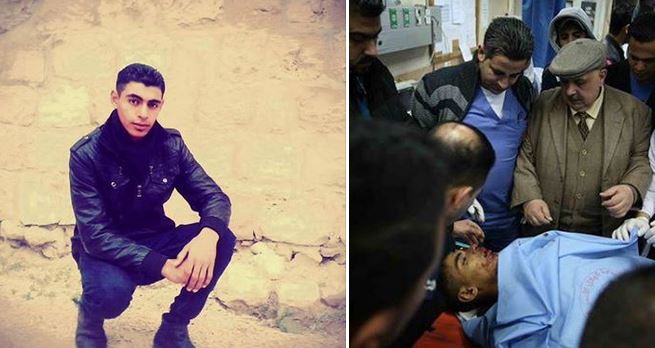 Palestinian medical sources have reported that a teenage resident of Burin village, south of the northern West Bank city of Nablus, was shot and killed, on Saturday evening, by Israeli army fire, while another Palestinian was injured, and kidnapped. The sources said the soldiers killed Ahmad Ibrahim Najjar, 19 years of age, near a bypass road used by Israeli soldiers and settlers, between the villages of Burin and Madama.

The Israeli army claimed Najjar and other Palestinians hurled stones and Molotov cocktails at Israeli military vehicles, and settlers’ cars.

The soldiers took the body of the slain Palestinian, held it for a few hours, and handed it later on to the Palestinian District Coordination Office (DCO).

The Palestinian News & Info Agency (WAFA) said Najjar was shot by two live rounds to the neck and lower jaw.
In addition, soldiers kidnapped another young Palestinian, who was also shot and mildly injured by army fire, and took him to an unknown destination.

After the shooting, the soldiers closed the area and prevented Palestinian ambulances from reaching the slain Palestinian, who bled to death, and the wounded resident.

The incident took place near the Gilad Israeli colony, built on Palestinian lands near Burin village.

Head of the Israeli Settlements File at the Palestinian Authority in the northern part of the occupied West Bank, Ghassan Daghlas, said dozens of soldiers have been deployed around the village.

He added that sporadic gunfire was heard in the area, especially after the soldiers attacked dozens of Palestinians, who protested the killing of Najjar.

The Palestinian official also said the “ongoing Israeli crimes, and violations, will never be able to stop the popular struggle in Palestine, but will only lead to more steadfastness and resistance.