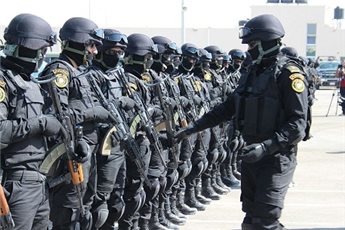 Palestinian security forces carried out household raids in Nablus and nearby Balata refugee camp on Sunday, including the home of the Palestinian Authority’s former general intelligence chief.Ma’an News Agency reports that Jamal Tirawi, now a Fateh-affiliated member of the Palestinian Legislative Council, said that PA forces stormed several houses, including his apartment building.

He said that security officers tried to break into his apartment, in Balata refugee camp, at 4 am:

The apartment is located in a building owned by his family.

Tirawi added that he intends to sue the governor of Nablus and security services in the city.

Security sources said that the forces who inspected Tirawi’s house were looking for one of his relatives, whom they suspected to be hiding there.

They additionally stated that they arrested five ‘fugitives’ in Balata refugee camp and in Nablus.

The crackdown is slated to continue until all so-called fugitives in the Nablus area are arrested.

PA security forces often conduct late-night raids in the homes of Palestinians across the West Bank, sometimes in conjunction with Israeli ‘security coordination’.

Though defacto president and Fateh member Mahmoud Abbas warned that, should the UN Security Council refuse the draft resolution recently proposed (and rejected), he would reconsider relations with Israel through ceasing security coordination, the relationship between the PA and Israeli forces remains intact.