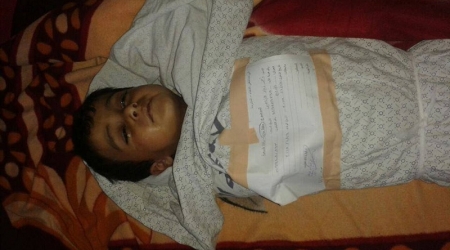 A 9-year-old Palestinian boy named Zaid has died, according to Al Ray Palestinian Media Agency, after Egypt and Israel refused to open the Rafah border crossing to allow him to travel for medical treatment.Though the details of the boy’s ailment are unclear at the time of this report, a Palestinian activist wrote on his Facebook page: ‘The poor boy died with tears rolling down his cheek.’

With Egpyt’s backing, Rafah crossing has been seized by Israel for nearly a decade, now, in mutual disregard of the ceasefire agreement between Hamas and Israeli forces, this past August.

In related news, Al Ray reports that Israeli forces killed four Palestinians and detained 470 from the occupied West Bank, Jerusalem, and Gaza, according to Ahrar Center for Detainees Studies and Human Rights.

Ahrar’s studies also showed that 467, of whom 40 are children, were abducted from the occupied West Bank and Jerusalem.

It also documented the detention of 26 women, most of whom are from Jerusalem. Ahrar noted that they were later released, after being interrogated by Israeli police.

In addition, Israeli forces detained three journalists from the West Bank, and are identified as Alaa’ Teiti, correspondent for Al-Aqsa TV, Mujahed Mufleh, who works with Huna al-Quds Press, and journalist A’mer Hlail.

The report also showed that Jerusalem has witnessed some 173 Palestinians detained.
The second highest number of detainees came out of Hebron (140). In Ramallah, 66 Palestinians were taken, 53 in Nablus, 47 in Bethlehem, 42 in Jenin, 27 in Qalqiliah, 15 in Tulkarem, six in Salfit and 3 in Tubas.

Ahrar noted, as well, that 21 Palestinians were detained in the Gaza Strip, some of whom are businessmen, at Erez crossing. A number of fishermen were also taken from Gaza.