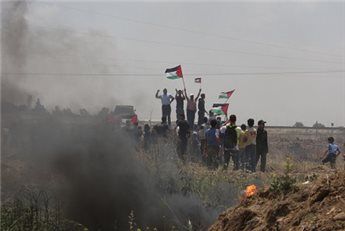 Israeli soldiers opened fire in the direction of Palestinian protesters marching near the border fence in the Gaza Strip, on Sunday.A spokesman for Gaza’s Committee to Break the Siege, Adham Abu Salmiya, told Ma’an that the march was in protest over the continued Israeli occupation of Palestinian lands and Israel’s refusal to allow reconstruction materials into Gaza.

The anger in the streets of Gaza will soon ‘explode in the face of those who besiege the Palestinian people, especially the Israeli occupation,’ Abu Salmiya said, referring to the eight-year long blockade of Gaza imposed by Israel with Egyptian cooperation.

He accused Israel of delaying reconstruction of the war-torn coastal enclave in the wake of the Israeli assault, this past summer, which saw the deaths of some 2,200 people, mostly civilians, and left nearly 110,000 homeless.

An Israeli military spokesperson would not immediately return a request for comment.