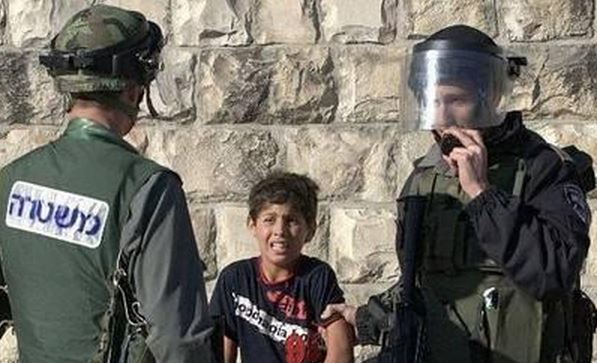 Hiba Masalha, a lawyer with the Palestinian Detainees Committee, managed to meet a number of Palestinian children imprisoned by Israel, who described to her the horrific torture and abuse they had experienced at the hands of the Israeli interrogators, and by the soldiers who kidnapped them. The children are in HaSharon and Mejeddo Israeli prison. They informed the lawyer of their very difficult conditions, and of the torture and abuse they suffer.

Masalha said that one of the detainees, identified as Husam Omar Abu Khalifa, 14 years of age, from Bethlehem, is currently held at the HaSharon prison. He is suffering from severe depression and a very bad health condition; he requires instant hospitalization and specialized treatment.

Another detainee, Malek Hamdan, 16 years of age from occupied Jerusalem, was assaulted and violently beaten by soldiers of the Nachshon brigade, resulting in various fractures and bruises to different parts of his body.

Detainee Mohammad Abdul-Fattah Radwan, 17 years of age from Qalqilia, was kidnapped by the soldiers on December 2 2014, after they stormed his family home at approximately 4 am, and beat him in front of his family before dragging him across the ground for a considerable distance, after handcuffing and blindfolding him.

He was then moved to the al-Jalama prison, where he was interrogated for 15 days, and testified that, during interrogation, the soldiers forced him into a very small chair and tied him for extended hours each day.

The child also said he is currently confined in a small, dirty, smelly and very cold cell, with a bright light turned on 24 hours a day, and that the food he was provided was of a low quantity and a very bad quality. The mattress and the sheet are also dirty and smelly.

Another detainee, identified as Mohammad Yousef Ekhlayyel, 16, from Hebron, was kidnapped on January 11 2014, after the soldiers shot him in the right thigh before kidnapping him.

He was returning home from school, when the soldiers shot him with a live round; he fell onto the ground, and was bleeding heavily when the soldiers started kicking him. The child was later moved to the Soroka Medical Center in Beersheba where he was admitted to surgery and remained in the Intensive Care Unit for three days.

Ekhlayyel said the soldiers beat him up while he was bleeding, and interrogated him at the hospital for an entire hour. He was constantly tied and shackled to his hospital bed during his entire stay and was placed in a room guarded by Israeli soldiers.

Ekhlayyel was later moved to the Ramla Hospital for two months, before he was moved to the HaSharon Israeli prison.

Related:
Report: ’37 Children Exiled From Their Homes In Jerusalem, 253 Under House Arrest’