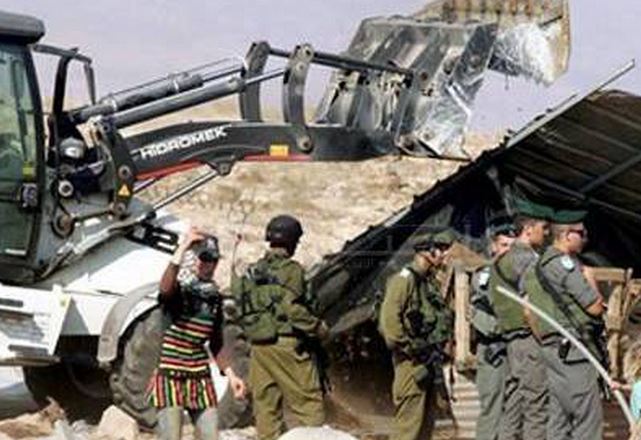 Israeli soldiers, accompanied by military bulldozers, invaded on Monday morning that village of Qasra, south of the northern West Bank city of Nablus, and demolished two agricultural rooms, a well and agricultural stone retaining walls.Ghassan Daghlas, a Palestinian official in charge of Israeli Settlements file in the northern part of the occupied West Bank, said a number of military bulldozers demolished two agricultural rooms, an irrigation well, and more than 500 meters of stone retaining walls, in the southeastern area of Qasra village.

Daghlas added that the demolished properties were close to the illegal Israeli settlement outpost of Yesh Kodesh, built on Palestinian lands, and that they belong to Anwar and Akram Taiseer.

Head of the Qasra Village Council Abdul-Athim al-Wady said the demolished properties are privately owned, built on Palestinian lands, and were funded by France.

The army claims the structures were not licensed and approved by the Civil Administration Office, run by the Israeli military in the occupied West Bank.

On his part, al-Wady said the residents, and the local council, have all official documents and licenses, including the approval of the Civil Administration Office, yet the military went ahead and demolished the properties.

He added that the invasion, and destruction of the Palestinian property, led to tension between the villagers and the invading soldiers; no clashes or injuries were reported.