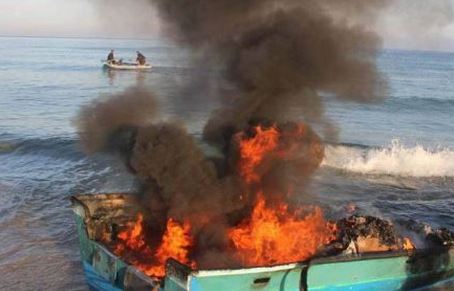 Israeli navy ships opened fire, on Monday at dawn, on a number of Palestinian fishing boats near the Sudaniyya shore, northwest of Gaza city. Eyewitnesses said one of the navy ships chased the fishing boats while firing rounds of live ammunition, forcing the fishers back to the shore.

The boats were within the six nautical miles allotted for the Palestinians for fishing.

On Thursday morning, navy ships attacked a number of Palestinian fishing boats, also in the Sudaniyya Sea, opened fire on them and forced them back to the shore.

On Wednesday morning, soldiers stationed across the border fence with the Gaza Strip opened fire at Palestinian fields east of Khan Younis.

Last Monday evening, the navy opened fire on a fishing boat, in Palestinian waters west of Gaza city, causing it to sink, and kidnapped four fishermen.

The Israeli navy targets Palestinian fishing boats on almost a daily basis, in clear breach of the Egyptian-brokered truce agreement reached on August 26 of last year.

The agreement includes allowing Palestinian fishermen to sail within 6 nautical miles in the Gaza Sea, with an incremental expansion in the allotted area. Under the Olso accords, the Palestinians are allowed to fish and sail within 20 nautical miles, but Israeli kept attacking them, and repeatedly unilaterally reduced the miles to 3, then to six.