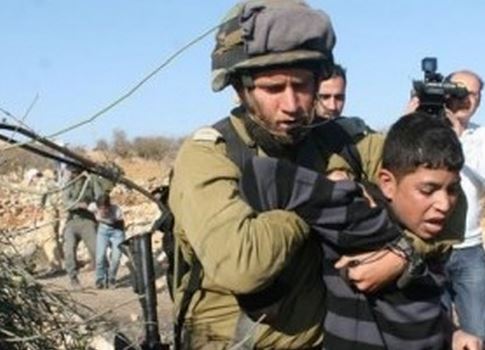 The Hebron Office of the Palestinian Prisoners Society (PPS) has reported that Israeli soldiers kidnapped 120 Palestinians, including 2 young women and 25 children, in Hebron, in the southern part of the occupied West Bank, in January.The PPS said the two kidnapped women have been identified as Fida Da’mas, 22, and Lobna al-Khatib, 27 years of age.

It added that most of the abductions were carried out by the military during late night hours, and that the soldiers deliberately caused property damage while breaking into the homes, and while violently searching them.

The soldiers also assaulted families, and frequently threatened them with physical harm during the invasions of their homes.

One of the detainees, Wadee’ Salama al-Jondy, 16 years of age, said he was kidnapped during evening hours near the al-‘Arroub refugee camp, after the soldiers attacked him causing various fractures and bruises.

The soldiers also attacked his brother, and forced him onto the ground, causing him to bleed from his head, in addition to several cuts and bruises to different parts of his body.

The PPS said, among the kidnapped 120 Palestinians, were 25 children who were mostly moved to the Etzion military base for interrogation, and faced very difficult conditions, in addition to constant harassment and abuse.

Sixteen of the kidnapped Palestinians are sick, require medical attention and follow-up, while 37 of the abducted have been forced under arbitrary administrative detention, without charges or trial.

Eighteen of the kidnapped Palestinians were moved to central interrogation centers, (Asqalan, Petah Tikva, al-Jalama and al-Maskobiyya), and most of them were beaten, assaulted, and tortured during interrogation.

The Ofer Israeli Military Court also imposed fines on some of the kidnapped Palestinians, totaling to more than 30.000 New Israeli Shekels.