Army Kidnaps 16 Palestinians In The West Bank, Jerusalem And Gaza 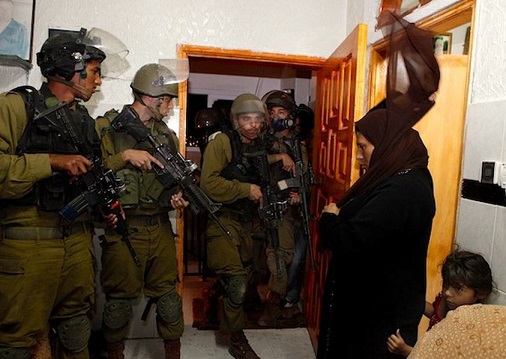 Israeli soldiers kidnapped, Monday, at sixteen Palestinians, after invading and searching their homes in different parts of the occupied West Bank, including five north of occupied East Jerusalem, and three Palestinians east of Gaza. Many Palestinians injured in Hebron.Media sources in the West Bank city of Bethlehem, have reported that several military vehicles invaded the Saff Street, the center of the city and its eastern part, and kidnapped Mohammad Nuwwara, 22 years of age, Mousa Salahat, 19, and Khaled al-‘Arouj, 23.

In addition, soldiers invaded a number of homes in Borqin town, southwest of Jenin, in the northern part of the West Bank, and kidnapped Ahmad Abu Samhoud, 21.

Three more Palestinians have been kidnapped from Hebron city, in the southern part of the West Bank, after the soldiers invaded different neighborhoods, and stormed homes.

Soldiers also broke into the Palestinian Ministry of Agriculture, and the Ministry of Finance, in Hebron city, and searched them, causing excessive property damage.

Furthermore, army installed roadblocks on the main entrances of Sa’ir and Halhoul towns and on the northern entrance of Hebron city, stopped and searched hundreds of cars, and integrated dozens of residents while inspecting their ID cards.

The invasion led to clashes between the invading soldiers and local youths, who hurled stones and empty bottles on their vehicles, while the army fired gas bombs, rubber-coated metal bullets and concussion grenades.

The wounded received treatment by local medics, and did not require hospitalization.

Also in Hebron, soldiers plowed Palestinian agricultural lands, in a number of communities, southeast of Yatta town, near Hebron,

Rateb Jabour, coordinator of the Popular Committee against the Wall and Settlements in southern Hebron, said a large military force, employees of the Civil Administration Office and the Environment Protection Agency, invaded the areas accompanied by military bulldozers, plowed and destroyed nearby 800 Dunams (197.68 Acres) of farmlands.

In Nablus, in the northern part of the occupied West Bank, a number of Palestinian youths managed to close the main entrance of an illegal Israeli colony, east of Qasra village, south of the city.

Clashes took place between the soldiers and school students in the village, after the soldiers demolished some structures.

In the Gaza Strip, soldiers kidnapped four Palestinians allegedly after they breached the security fence, east of the coastal region.

Israeli sources said the four Palestinians have been taken prisoner near Kibbutz Be’eri, in the northwestern Negev Desert, close to the Gaza border. The army claimed the four carried guns and other combat equipment.

On Sunday evening, an Israeli settler rammed his car into cattle of sheep in the al-Karma village, south of Hebron, killing twelve. The sheep belong to Mohammad Abu Sheikha.

Furthermore, a woman identified as Hala Rajabi, said a number of soldiers chased her, on Sunday evening, in Hebron, causing her to fall and suffer various cuts and bruises; she was moved to the Hebron Governmental Hospital for treatment.