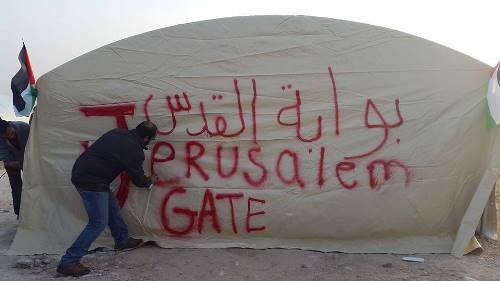 Hani Halabiyya, spokesperson of East Jerusalem Popular Resistance Committees, said Israeli soldiers invaded the “Jerusalem Gate” protest tent village that was installed earlier by nonviolent activists, and informed them the military intends to demolish it.Halabiyya said that the army has surrounded the village, and pushed more units in the area, adding that the activists do not intend to leave

Adel Salah, head of the Abu Dis Local Council, said the village was installed to counter the Israeli E1 Plan that aims at expanding the boundaries of Ma’ale Adumim colony, so that Tel Aviv can link it with East Jerusalem, thus, blocking geographical contiguity between the central and southern parts of the occupied West Bank.

He added that the Popular Resistance Movement is protesting the dispossession of the Bedouins living in the area, for the benefit of Israel’s illegal colonies.

Monther ‘Amira, head of the Coordination Committee of the Popular Resistance Movement, told the Maan News Agency that dozens of activists, members of different national and social parties, and the Abu Dis Local Council installed the village.

“We called it Jerusalem Gate to express our rejection to the illegal Israeli plan that aims at removing the Bedouins, demolishing their homes and structures, and relocating them in certain locations,” he said, “This is all part of Israel’s E1 plan. We decided to name our protest village Jerusalem Gate because it is the closest point to Jerusalem, and you can see the city from this location.”

‘Amira also stated the Israeli plan largely aims at removing the Bedouins from the area, Bedouins who have been living there for dozens of years, so that Israel can build its racially segregated illegal colonies.

On his part, Halabiyya said that more than 250 activists, in addition to residents of Abu Dis, Sawahra and al-Ezariyya towns, and Arab al-Jahalin villagers participated in installing the village, and are determined to resist the illegal Israeli plan to remove them, and demolish it.

Gate Of Dignity Was Built On Lands Of Beit Iksa North Of Jerusalem http://www.imemc.org/article/64913