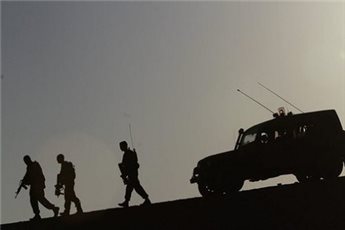 Israeli forces Wednesday opened gunfire at Palestinian farmers as they were farming their borderline farmlands to the east of Khan Younes, according to WAFA correspondence.Soldiers, stationed in military watchtowers and deployed along the border, indiscriminately opened fire on Palestinian farmers as they were plowing their farmlands, forcing them to leave.

No casualties were reported in this new cross-border attack which constitutes a flagrant violation of the ceasefire deal that ended the latest deadly Israeli onslaught on the war-ravaged coastal enclave.

Israeli Forces routinely open fire on Palestinian farmers and other civilians if they approach large tracts of borderline land that Israeli forces have deemed off-limits to Palestinians, as well as on fishing boats sailing within the six-nautical-miles zone.

According to UNOCHA, 17 percent of Gaza’s total land area and 35 percent of its agricultural land were within the buffer zone as of 2010, directly affecting the lives and livelihoods of more than 100,000 residents in Gaza.

Israel and the Palestinian factions agreed on a ceasefire deal this past August, ending the latest deadly Israeli onslaught on Gaza that claimed the lives of over 2,200 people, overwhelmingly civilians.

The ceasefire deal stipulated that Israel would immediately ease the blockade imposed on the strip and expand the fishing zone off Gaza’s coast, but it has failed to do so.