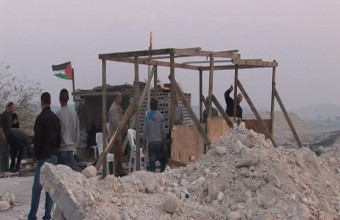 The symbolic village for popular resistance, ‘Jerusalem Gate’, was demolished for the fourth time, on Sunday.Mustafa Al-Barghourthi, General Secretary of the Palestine National Initiative (PNI), told the Palestinian News Network (PNN) that, if Abu Dis falls under Israeli control, the West Bank will be divided in half, with 62% of the land seized, and futher hindering any possibility Palestinian state.

Israeli forces, for the third time, dismantled the village on Thursday, just hours after it had been rebuilt, using pickup trucks and bulldozers. Tents were damaged, ID’s retained, chairs and supplemental food were confiscated, and the village was again rebuilt.

The project was first established Tuesday, on lands inhabited by the al-Jahalin Bedouin clan, in protest of the new ‘E1’ settlement project which aims to confiscate thousands of dunams from East Jerusalem, for the purpose of settlement expansion.

Munther Amira, chair of the higher coordination committee against the wall and settlements, assured the PNN that the committee will carry on with activities and work to increase resistance against Israeli apartheid policies.

Activist Mahmoud Zawahra said that Israeli forces chased the participants, as well as residents of Abu Dis, Ezariyah and other East Jerusalem desert villages, attacking them with teargas and sound grenades.

Jamil Barghouthi, activist and coordinator of the village, said that Jerusalem Gate was a reaction and rejection of the Israeli decision to displace East Jerusalem Bedouins into al-Eizariyya and Nuway’imah, near the Jordan Valley.

Voicing the role of the popular struggle against settlements and continued Israeli violations, Barghouthi called on popular resistance and relative associations to participate in the upcoming activities, in order to make 2015 the year for ending the Israeli occupation and its ethnic cleansing campaigns.

Israeli forces demolished homes of the Ka’abneh clan two weeks ago, in an attempt to displace them into a residential area of the Jordan Valley against their will.

The Israeli occupation continues with its discriminatory policies against Arabs in East Jerusalem, serving them with arbitrary demolition notices under the pretext of building without a permit, or simply claiming their land for the state as ‘absentee property’.

Through these policies, Israel intends to further expand East Jerusalem’s largest settlement, ‘Ma’ali Adummin’, and connect it with other Israeli-occupied cities, to seize it and evict Palestinian residents from the area.

The project began in 2007, threatening more than 15,000 Bedouin Palestinians (half of whom are children) living in groups since the Nakba of 1948. 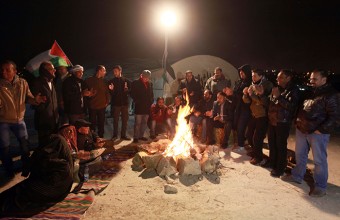