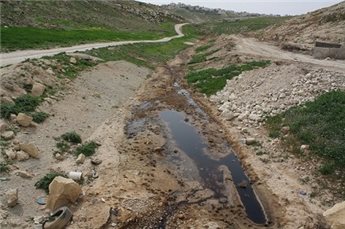 The Palestinian Environment Quality Authority said, on Saturday, that any individual found responsible for exporting hazardous waste from Israel to Palestinian lands will be sentenced to life imprisonment with hard labor.The warning comes amid increasing concern over Israeli company policies of dumping toxic materials in Palestinian-controlled areas of the occupied West Bank, with Israeli government complicity and the use of local Palestinian collaborators, Ma’an News Agency reports.

The Environment Quality Authority, also known as the Ministry of Environmental Affairs, is attempting to put an end to all forms of Israeli violations against the Palestinian environment.

The authority called on Palestinians to cooperate with the authority, in order to support its push for a safe and clean environment for all.

The statement comes in response to the recent discovery by customs police of a truck carrying Israeli asbestos waste to dump in Tulkarem.

Israeli businesses located in Jewish-only settlements of the West Bank regularly dump their waste in rivers or in public areas that flow down and negatively affect the environment of nearby Palestinian villages.

The problem is exacerbated by the fact that settlements are generally located on hills, above pre-existing towns.

While Israeli authorities enforce relatively restrictive laws against the destruction of the environment inside Israel, many factories have moved to West Bank settlements because the authorities there are lax in enforcement and Palestinian authorities are helpless to stop them.