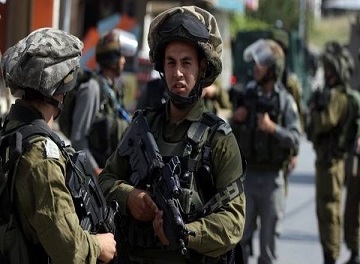 Israeli soldiers kidnapped, on Sunday at dawn, a Palestinian child from his family homes, near the Al-Aqsa Mosque in occupied East Jerusalem. Army also invaded Jenin and Bethlehem, broke into homes.The Palestinian TV said the soldiers kidnapped a child, identified as Mohammad Sharifa, after invading, and searching, his family home in Bab Hatta neighborhood near the Al-Aqsa Mosque.

It added that the child was moved to the al-Qashla detention and interrogation center in the Hebron Gate area, in the Old City of Jerusalem.

In Bethlehem, soldiers invaded Dar ‘Ali area, east of the city, and handed Anas Yousef Suleiman, 19 years of age, a military order for interrogation in the Etzion military and security base.

Palestinian security sources in Jenin said the soldiers invaded Ya’bad town, south of Jenin, before breaking into the homes of Ali and his brother Mohammad Sharif Barry, in addition to Saleh Shouban Herzallah and Sharif ‘Ali Herzallah.

The soldiers interrogated the families while searching and ransacking their homes, and withdrew later on after handing the interrogation orders to the four Palestinians.