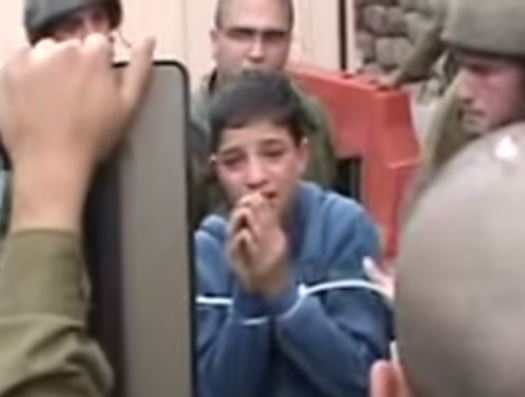 The Palestinian Detainees and Ex-Detainees Committee has reported, Saturday, that Israeli soldiers deliberately terrorize Palestinian children during their abduction, and while under interrogation.The Committee said the soldiers continuously shout in the faces of the kidnapped children, assault and beat them, and “drag them to their vehicles in a savage manner, treating them like criminals.’

It added that, during interrogation, the children are subject to intimidation, physical and psychological torture, in addition to being threatened that the soldiers would harm their families, especially their mothers and sisters.

The Committee further stated that there has been a dangerous increase in the abduction of children in the West Bank and occupied Jerusalem, adding that such an escalation indicates deliberate and planned policies.

“The children aren’t only beaten and assaulted during the abduction” it stated, “They are often taken to the nearest station; and that is when they are interrogated, forced to stand for extended hours while handcuffed, legs shackled, and blindfolded; they are frequently threatened of bodily harm on them and their families.”

The Detainees Committee further stated that the kidnapped children are subjected to the same treatment, torture and assaults the adult detainees go through, adding that Israel violates all international treaties and agreements regarding the protection of children.

It called on various human rights and legal groups around the world to intervene, and put an end to Israel’s ongoing, and escalating, violations against the children and the civilians in occupied Palestine.

14-year-old Khaled Al-Sheikh is a Threat to Israeli Security
http://www.imemc.org/article/70485