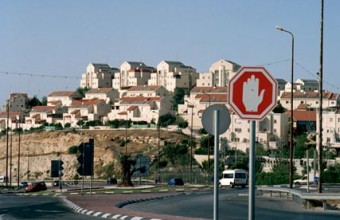 Extremist Israeli settlers cut down over 70 Palestinian olive trees in the Hebron district on Monday, according to locals. Meanwhile, some 3,740 dunams in areas of four West Bank settlements have been marked as ‘state lands’ by Israeli authorities.Witnesses told Ma’an News Agency that the settlers destroyed over 70 tree saplings near the town of Sair.

The trees had been planted a week ago in an area threatened with annexation, near the illegal settlement of Metzad, located in the Gush Etzion bloc west of Bethlehem.

Locals have organized a campaign to replant the trees.

Attacks on olive trees are a key way by which Palestinians are forced out of their homes and lands confiscated for settlement construction, as the loss of a year’s crop can signal destitution for many.

Since 1967, approximately 800,000 West Bank olive trees have been uprooted, according to a joint report by the Palestinian Authority and the Applied Research Institute of Jerusalem.

In a related vein, Israeli forces were reported to have detained the president of the Palestinian Authority’s committee against the apartheid wall and settlements while he was planting trees near Ramallah.

Sources told Ma’an that Jamil al-Barghouthi was arrested while taking part in a tree planting demonstration on Silwad land that is under threat of Israeli confiscation.

Israeli forces reportedly assaulted al-Barghouthi and other participants in the activity before making the arrest.

In December, PA President Mahmoud Abbas appointed al-Barghouthi to replace Ziad Abu Ein as the head of the PA committee against the wall and settlements.

Abu Ein died after being assaulted by Israeli soldiers during a tree planting demonstration in the village of Turmusayya in the Ramallah district on December 10th.

PNN reports that Israeli Civil Administration, last year, prepared major expansions of four West Bank settlements; Kedumim, Vered Yericho, Neveh Tzuf and Emanuel. Some 3,740 dunams in the areas of the settlements were marked as state lands. More than 99% of ‘state lands’ are allocated to settlements.

According to Haaretz, Preparations for submitting construction plans were carried out on 18 projects encompassing 12,840 dunams. This marked a significant decline from 2013 when preparations were made on 26,548 dunams. An examination of the work done in these areas demonstrates the government’s intentions to expand settlements.

There has also been a change in settlements’ areas of jurisdiction. Last year they increased by 1,162 dunams. Psagot received 155 dunams, Elkana 904 dunams, and Mevo Horon 600 dunams. On the other hand, the settlements Tzufim, Kfar Oranim and Halamish became smaller.

Last December Haaretz reported that the state had marked 35,000 dunams located in firing zones near the settlements as state lands. Although the government claims that the firing zones are used for army training exercises, they have in fact started to prepare them for transfer to the settlements.

Researcher Dror Etkes, who heads the Peace Now settlement tracking project, analyzed the data and told Haaretz: ‘These data prove that the Netanyahu government continued in 2014 to energetically promote the End of Days vision of an apartheid state, where settlements are built simultaneously all over the West Bank, and millions of Palestinians live as second-class citizens in the enclaves between them.’