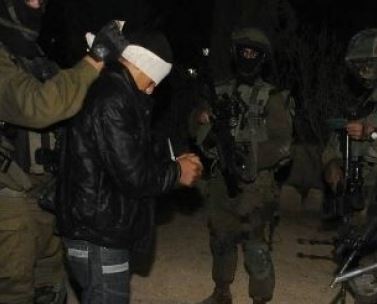 Israeli soldiers kidnapped, on Monday at dawn, eleven Palestinians in the West Bank, including five teenagers in occupied East Jerusalem, during military invasions targeting Palestinian communities and homes. Army uproots farmlands in Beit Hanoun, in the northern part of the Gaza Strip.The Wadi Hilweh Information Center in Silwan has reported that the soldiers invaded Jabal az-Zeitoun (at-Tour) neighborhood, overlooking the Old City of Jerusalem, and kidnapped five teenagers after breaking into their homes and violently searching them.

The two have been identified as Walid Abdullah Manasra, 30, and Maher Hasan Qassem, 28; the two were taken prisoner after the soldiers invaded and ransacked their homes.

Soldiers also invaded a number of neighborhoods in Hebron city, installed roadblocks on the main entrances of Sa’ir and Halhoul towns, north of the city, stopped and searched dozens of cars, and interrogated scores of residents while inspecting their ID cards.

Two more Palestinians have been kidnapped in Talfit village, south of the northern West Bank city of Nablus, after the soldiers invaded the village and searched a number of homes.

The kidnapped Palestinians have been identified as Mansour Samer ‘Awwad, 15, and Mohammad Wadea’ Musallam, 19 years of age.

In Bethlehem, soldiers invaded Wad Ma’ali area, south of the city, and kidnapped three Palestinians after searching and ransacking their homes.

Two of the kidnapped have been identified as Shadi and his brother Mohammad ‘Awwad al-Hreimi, in their twenties.

Army also invaded Beit Fajjar town, south of Bethlehem, and handed a number of local youths military orders for interrogation in the Etzion military and security base.

Two of them have been identified as Mahmoud Hani Deeriyya and Na’im ‘Emad Thawabta.

In addition, a Palestinian from Husan nearby town handed himself in to the Israeli military after the soldiers claimed he tried, Sunday, to run over a soldier on the Tunnel roadblock, near Beit Jala city, northwest of Bethlehem.

Media sources in Gaza said five vehicles advanced more than 100 meters into the lands, before bulldozing them.

The soldiers did not open fire during the invasion, but local farmers had to leave their lands as the army, its armored vehicles and bulldozers, advanced into the area.