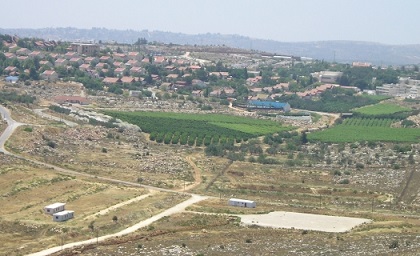 The Israeli High Court ordered, on Sunday, the removal of nine homes illegally built in the “Ofra” colony, built on privately owned Palestinian lands in the northern part of the occupied West Bank, and gave the Israeli government two years to implement the ruling.The decision was made after a number of human rights groups, legal organizations, and owners of the Palestinian lands, filed appeals demanding the removal of the illegal construction.

Residents of ‘Ein Yabroud, near the central West Bank city of Ramallah, along with Yesh Din and B’Tselem Israeli Human Rights groups filed the appeal against the illegal construction in 2008, demanding the removal of homes illegally built on privately-owned Palestinian lands.

The developments were built without the approval of the Israeli “Civil Administration Office,’ run by the Israeli military in the occupied West Bank.

It was recently revealed that the Israeli Housing Ministry financed the construction of dozens of homes, illegally built in Ofra settlements, despite its knowledge that the Civil Administration never approved those constructions.

Israeli daily Haaretz recently reported that one-third of the budget for development and construction in rural areas went, over the last two years, for the benefit of settlement construction and expansion, including Ofra colony that received 1.7 Million New Israeli Shekels, to construct 66 units.

On December 18 2013, the Housing Ministry approved a budget for the construction that actually started, without any license of approval, by the end of 2010.

It was also revealed that Amna Israeli movement, founded in 1978 as the colonial branch for the “Regional Council of Settlements,” started large-scale construction in an old Jordanian army base that was illegally confiscated by Israel and its lands became part of Ofra.

In April of 2011, the Palestinians filed an appeal to the Israeli High Court leading to a ruling to halt all construction, although many settlers have already moved into dozens of completely built units, while many units were still in the construction phase.