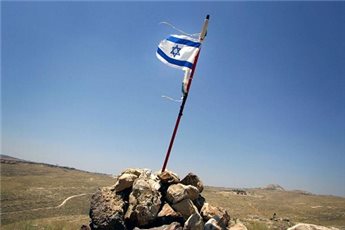 Israeli forces raided, on Tuesday evening, the town of Deir Sammit, to the west of Hebron, where they erected a number of mobile check points. In the village of al-Shuyukh, to the northeast, some 2,000 dunams have been designated for annexation.Eyewitnesses reported, according to Al Ray Palestinian Media Agency, that soldiers arrived in a military jeep and carrier, and erected a checkpoint on the main street which connects Dier Sammit and Beit Awwa, stopped people vehicles and checked IDs.

Soldiers also reportedly attempted to assault pedestrians, during the operation.

Al Ray notes that Israeli troops, for the second day, now, have been harassing village residents during raids in the day hours.

Forces also stormed, at midnight, the house of Amjad al-Najjar, director of Al-Aseer club for detainees’ affairs in Hebron.

Al-Najjar said that around 50 Israeli soldiers stormed the house after destroying its main door, then gathered his entire family into one room and beat his elderly mother until she fainted.

Also in the Hebron district, Israel has earmarked around 2,000 dunams (500 acres) of private Palestinian land for annexation, local activists said.

Muhammad al-Halayqa, an activist in the village of al-Shuyukh, northeast of Hebron, told Ma’an News Agency that Israel’s Civil Administration posted notices warning of confiscation on land belonging to the al-Halayqa, Rasna and al-Hasasna families.

The Mayor of al-Shuyukh, Sharif al-Halayqa, stated that Israeli forces have prevented locals from accessing their land, adding that the areas slated for confiscation are likely going to be used for settlement construction.

The village council will coordinate with Palestinian officials and legal groups to try to prevent the annexation.

A spokesperson from Israeli civil administration told Ma’an that the land in question was designated as ‘state land’.

On January 27th, an Israeli court issued an order to confiscate hundreds of dunams of land northwest of Hebron, in the village of Beit Ula. The land is located in Area C, under full Israeli security and administrative control.

Last December, Israeli authorities declared a vast area of private Palestinian land in the northern Jordan Valley to be a closed military zone, in preparation to confiscate the land.

Ribhi al-Khandaqji, the governor of the Tubas district, said in a statement that the land was located in the Ein al-Sakut area and measured about 10,000 dunams (2,500 acres).