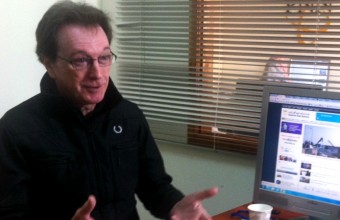 Jesus Christ Embassy Chairman, Terry McIntosh, will launch an international campaign, tomorrow, to call 1,000,000 people to pray for peace in Jerusalem, and for the restoration of Palestinian biblical and historical rights.The conference will discuss McIntosh’s research and book ‘Resurrection Palestine’ which documents biblical and secular history to prove that the name Israel originally belonged to Palestinian ancestors, and that the Jewish state appropriated the name in 1948.
DNA science confirms his findings. The meeting will close with a question and answer session.

Reverend McIntosh, in an interview with the Palestinian News Network, said that the initiative aims for Palestinians to regain their rights which, through different methods, implement the teachings of Jesus Christ.

‘The initiative will begin at the grassroots through the use of media, education, facts and realities and reaching in to the Zionist christian communities to deliver the truth regarding the political situation in Palestine, and especially according to their own faith and the teachings of Jesus Christ and the Bible,’ McIntosh told PNN.

The initiative will take place on an international level, through letting people know the truth and responding to it, in making a change.

‘Truth must be an element of everything because it will be long term lasting. And, so, we will call on people to join us on grassroot levels not in depending on political leaders, but through [the people] responding to the truth.’

A press conference will be held Thursday, February 12th, at 4 o’clock in Al-Rawdah Restaurant Meeting Hall, Jericho, to launch the initiative.

A segment of the Christian religion has been hijacked to serve the purpose of special interest groups that harm Palestine, according to the JCE. The 100,000,000 strong Christian Zionist community supports the politics of Israel and, thereby, contributes to the theft of land, bloodshed and continued harm.

According to the Christian Bible, Palestinians are entitled with full rights to land ownership and the promises of God applied equally, regardless of religious affiliation, says McIntosh. The initiative’s goal is to educate people worldwide about what the Christian Bible really says regarding God’s rich love for Palestinians and their God given rights to life, land and liberty.