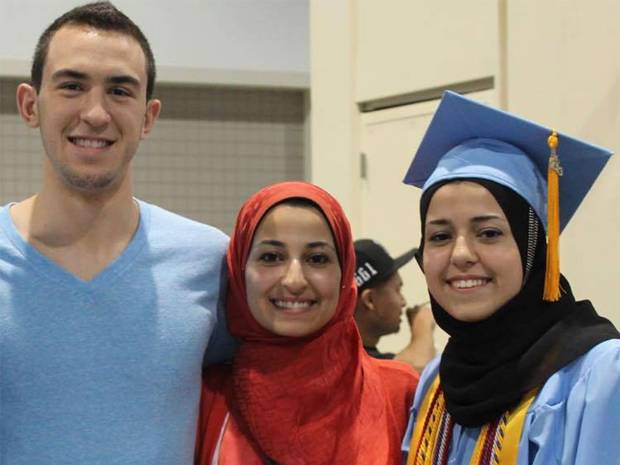 On Tuesday evening Chapel Hill police say that three people were shot to death at a condominium complex located just east of the University of North Carolina campus. A man has been arrested in these gruesome slayings.

Chapel Hill police told local news outlets that Craig Stephen Hicks, aged 46, was arrested and has been charged with three counts of first degree murder. The suspect is being held at the Durham County Jail as of Wednesday morning.

Police responded to a report of gunshots in the evening of Tuesday, February 10th. Upon entering the home they found three people who were pronounced dead at the scene.

Sources close to the investigation tell IMEMC that all three had been shot in the head.

46-year-old, Craig Stephens Hicks, is in custody suspected of these killings.

Hicks described himself on Facebook updates as an atheist and regularly posted images and texts condemning many religions, Islam among them.

Shock has swept the small community of Chapel Hill, as many neighbors and friends have called the slain family some of the nicest people one could ever know.

An American football and basketball fan, Syrian-born American, Deah Barakat, was a dental student at the University of North Carolina and volunteered with a charity providing emergency dental care to children in Palestine.

Deah regularly updated his Tiwtter account, and wrote in January: “It’s so freaking sad to hear people saying we should ‘kill Jews’ or ‘kill Palestinians’. As if that’s going to solve anything.”

It has been learned from family members of Barakat that he and Palestinian student, Yusor Abu Salha, were married less than two months ago, in late December. Yusor was planning to enroll in dental school at the university shortly before her death.

Razan, a student also from Palestine and the third murder victim, who was Yusor’s sister and lived with the couple, ran a popular blog detailing her interests in photography and art.

In a painful turn, last night police in Chapel Hill were forced to turn family members away from the crime scene causing confusion, hurt, and anger.

Many in the Arab American and American Muslim communities are identifying this murder as a hate crime. Based on the alleged murderer’s own social media content, it would appear that his disdain for non-whites and those are are religious could play some part into the motive for these killings.

Yusor and Razan Abu Salha come from a prominent Palestinian family and all of Palestine are mourning their tragic deaths today.

The Council on American-Islamic Relations, the nation’s largest civil advocacy group for Muslims, called on law enforcement officials Wednesday to address speculation about a motive for the killings.

‘Based on the brutal nature of this crime, the past anti-religion statements of the alleged perpetrator, the religious attire of two of the victims and the rising anti-Muslim rhetoric in American society, we urge state and federal law enforcement authorities to quickly address speculation of a possible bias motive in this case,’ CAIR National Executive Director Nihad Awad said in a statement. ‘Our heartfelt condolences go to the families and loved ones of the victims and to the local community.’

Under the current U.S. Federal guidelines of what defines terror, this crime targeting Palestinian women wearing traditional modesty covering while one of the women’s husbands attempted to defend the women from the attack does seem very much like a terrorist attack, one source told IMEMC Wednesday, speaking under conditioning of anonymity.

As this story progresses, IMEMC will provide you the latest updates.