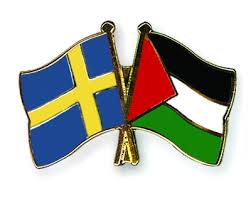 PA President Mahmoud Abbas, on Tuesday, inaugurated the new headquarters of the embassy of Palestine in Sweden.The ceremony took place in the presence of Swedish Foreign Minister Margot Wallström, together with other government officials and foreign ambassadors.

Abbas praised Sweden for its recognition of Palestine and said that the country had taken a ‘brave step’ which should be emulated by other members of the European Union.

‘Such recognitions do not mean that we don’t want to negotiate with Israel,’ Abbas said.

‘We call upon the Israeli government to start negotiations on the basis of international legitimacy and to halt the procedures and sanctions it has taken against the state of Palestine by withholding Palestinian money.’

Abbas said that the PA would negotiate regardless of international recognition by states or the United Nations Security Council.

‘It would be better for both sides to sit around the negotiation table to obtain two states, one for the Palestinians to live side by side with Israel in security and stability,’ he added.

Abbas’ visit comes a month after a senior Israeli official said Swedish Foreign Minister Margot Wallström was not welcome in the country.

Wallström, last month, postponed a trip to Israel amid Israeli press reports that her counterpart Avigdor Lieberman did not want to meet her.

Ahead of Abbas’ visit, Israel’s ambassador to Stockholm, Isaac Bachman, described the Palestinian leader’s diplomatic efforts as a ‘diversion’ from direct talks with Israel.