Many Injured By Israeli Gas Bombs Near Jenin 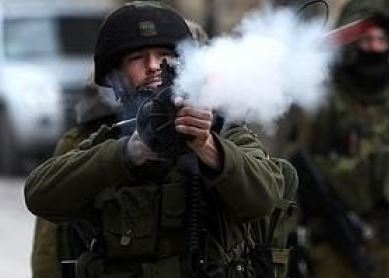 Palestinian medical sources have reported, on Thursday at dawn, that many residents suffered the effects of tear gas inhalation during clashes with Israeli soldiers invading Zabbouba town, near Jenin. One Palestinian kidnapped in Jerusalem.The sources said that local medics provided treatment to several residents, who suffered the effects of tear gas inhalation, after the soldiers fired dozens of gas bombs into the streets, and at a number of homes.

Scores of local youths clashed with the invading soldiers, when several armored military vehicles invaded Zabbouba, after surrounding it.

On Wednesday evening, soldiers assaulted a young Palestinian man, in Silwan town south of the Al-Aqsa Mosque in occupied Jerusalem, and kidnapped him.

The Wadi Hilweh Information Center in Silwan said the soldiers stopped Yahya Jum‚Äôa al-‚ÄėAwar, 22, and Jamal Mousa ‚ÄėAwad, 21, while walking in ‚ÄėEin al-Lowza neighborhood, and started kicking and beating them before kidnapping Yahya.

The invasion led to clashes with local youth who threw stones, empty bottle and Molotov cocktails at them while the soldiers fired rounds of live ammunition, gas bombs and rubber-coated metal bullets.