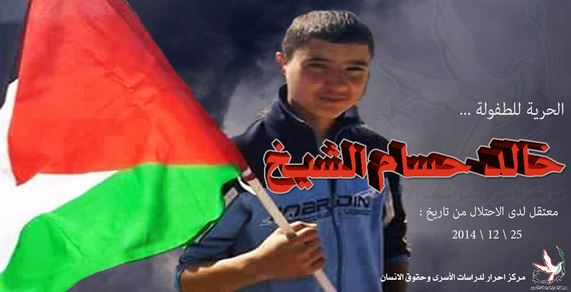 The Ahrar Center for Human Rights has reported that an ailing child detainee, held by Israel since his kidnapping on December 24, 2014, in occupied Jerusalem, is facing seriously deteriorating health conditions, including anemia.Ahrar said that Khaled Husam Mahmoud Sheikh, 15 years of age, is from Beit ‘Anan town, in occupied Jerusalem, and that the army is accusing him of throwing stones at the soldiers, and burning tires.

His father told Ahrar that his son suffers from a number of health conditions, including anemia, as his current hemoglobin blood cell count is low, and added that the family was deeply concerned about their child, especially since Israel is not providing him with the urgently needed medical attention.

Ahrar stated that Khaled was walking near the Israeli Annexation Wall, close to his family home, on December 25 of last year, when he was kidnapped by the Israeli military.

Israeli military courts already held three hearings to look into his cases, and the charges he is facing, while his family has never been allowed to visit him, hug him, or even talk to him while either in detention or at court.

Whenever he was brought to court, the soldiers brought him handcuffed and shackled despite his young age, and his bad health condition.

On Wednesday, February 11, his family said a court hearing, to look into the case of their child, has been scheduled to February 25.

Head of the Ahrar Center for Detainees’ Studies and Human Rights Fuad al-Khuffash said Israel is currently holding captive nearly 300 children; the youngest of them is Malak al-Khatib, who was kidnapped by the army 38 days ago.

Malak is currently held in the Ha-Sharon Israeli prison, after an Israeli court sentenced her to two months imprisonment, and a 6000 Shekel fine. http://www.imemc.org/article/70324

Al-Khuffash called on international human rights groups to act to ensure the release of all children held by Israel, and denied their very basic rights, and warned that international idleness towards the escalating Israeli violations would just lead to further crimes and abuse.