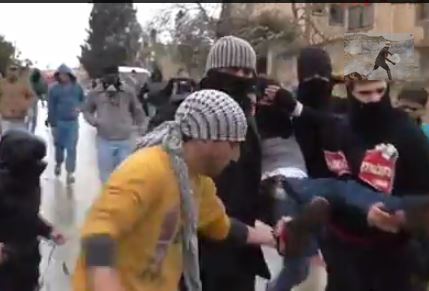 The Popular Committee against the Wall and Settlements in Kufur Qaddoum, near the northern West Bank city of Qalqilia, said Israel soldiers invaded the village to suppress its weekly nonviolent protest leading to clashes with local youths; one teen was shot by a live round, while dozens suffered the effects of tear gas inhalation. The protesters marched demanding the army to open the main road leading to their village that the soldiers closed 13 years ago.

He added that the soldiers shot and injured Jamil Shteiwy, 17 years of age, with a live round in his leg, and that local medics moved him to the Rafidia governmental hospital in Nablus.

Local youths burnt tires and blocked the main village road with rocks, in an attempt to prevent the soldiers from invaded it. The army used its bulldozers to remove the rocks and burning tires.

In addition, an army bulldozer driver dumped the burning tires in the yard of the home of resident Adnan Ali, the Popular Committee said.

It added that dozens of residents, along with Israel and international peace activists marched despite the pouring rain, and chanted against the ongoing Israeli occupation of Palestine, Israel’s colonies and its apartheid wall.